The ECWBA made a short presentation at the Markesan Public Library on Monday February 26th.  About fifteen people attended the presentation.  A few were potential new beekeepers while others were there for adult education.  Special thanks to ECWBA members Patti, Mark, Larry, Mary, Paul, Al and Fred for either presenting or providing support. 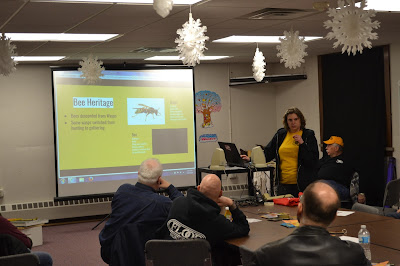 CAUSE OF WINTER LOSSES? submitted by beekeeper Jon

Beekeeper Jon submitted this link to research being done at University of Wisconsin-Stout.  The link is for an hour long YouTube video and describes a bacteria (Serratia marcescens) transmitted by varroa.  After watching the video I said to myself "Hey! I've seem the same behavior in some of my deadouts this winter!".

The reseachers say they have seen this through out Wisconsin and Minnesota.  In addition they found it in one out of state package.

Again the varroa mite is the main method of transmitting the bacteria.   So we probably need to up our game on varroa mite control.  Nothing like a good challenge.  I, for one, will be adding a spring mite treatment and maybe an early summer treatment.

It was a warm February day today; up in the lower 40's with the sun shining.   These conditions resulted in the bees performing cleansing flights.  Based on the number of golden spots in the snow and the small numbers of dead bees in the snow, it appears most bees were able to complete their cleansing flights and return to the hive. 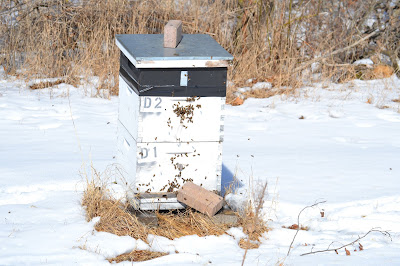 I also used these warm conditions to check the availability of emergency sugar in each hive.  Most were OK, but I did add more sugar to many hives to ensure they will be good well into March.  Unfortunately I also discovered two more hives that did not survive the below zero temperatures of last week.  I have not had the chance to analyze any of my deadouts yet.

ALSO, remember there will be a ECWBA club meeting this Saturday.  See the events section of the blog for time and location.
No comments:
Email ThisBlogThis!Share to TwitterShare to FacebookShare to Pinterest

For beekeeping beginners.  Here is a 4 part webinar class offered by Brushy Mountain.   Oops, couldn't figure out how to fix this.

The weather forecast in central Wisconsin for this Wednesday is sunny and the low 40's.  That is a good time to check your hives.  Its still too cold for a thorough inspection, but a quick inspection is OK.  Plan out what you are going to do prior to opening the hive.

First, be prepared and make a few emergency sugar discs ahead of time.  Second, a few guard bees may attack when the hive is opened.  Do you want your veil?

So now to the inspection.  Think through the inspection steps several times so you know what you will be doing.  Then remove the outer and inner covers.

1) Is the hive alive or dead.  You should be able to assess this in about 5 seconds.  Normally at this time of year the cluster will be in the top brood chamber box and readily visible.

2) Are the bees all the way up to the tops of the frames?  Yes/no?  If yes, they are probably short of food and you can add an emergency sugar disc and close the hive back up.   If they are still several inches down everything is OK.

3) How big (wide) is the cluster on top of the frames?  If you only see bees between one or two frames the hive probably will have trouble building up in the spring and you should start considering your options; replace with a new package or add bees from a strong hive later in April.

That's all that you need to do.  The quicker the better.  There may be eggs or brood and you don't want to chill them so get things closed up again within 30 seconds.

The “Live or Let Die” method of beekeeping combined with package bees doesn’t have a ghost of a chance of succeeding with the current problems of varroa and viruses.    Some beekeepers somehow cling to this philosophy, and of course their bees die year after year.    They probably have a better chance of winning the Megamillions lottery than having good bee survival.

Even mite controls using chemicals, used by the majority of beekeepers, are just stop gap measures.  These methods may help your hives to survive through the winter, but will not result in an improvement of the ability of the bees to cope with these enemies.  Simply put, mite chemicals are a crutch, not a longterm solution.   What can a hobbyist beekeeper do to help in the long run?


What we shouldn’t do is wait until someone else breeds a better bee and hope one of the queen factories adopts them.  However, we can take an active part in the improvement of the bee genetics.


It is a given that all hives have varroa and viruses.  But there are variations, sometimes wide variations, in the how each hive copes.  The simplest way to improve your apiary is to replace the queens in those hives that cope poorly with varroa.  The definition of “coping poorly” is a high varroa infestation level.  First, identify those of your hives that have higher mite levels.  It is those hives that should be targeted for queen replacement.  This should be done prior to mid-season.  If done too early,  mite levels may not have built high enough to be detectable and to allow you to differentiate between bad and good hives.   If too late, the new queen may not be able to get fully established before winter.   Mite levels anytime in the spring or summer of over three (3) per hundred bees are not good; five (5) per hundred being a guaranteed death sentence for the hive.   Getting hobbyist beekeepers to monitor mite levels is probably the biggest hurdle.  Simply put, most beekeepers, probably 95% or more, do not (in other words are too lazy) to perform this task.  I am as guilty as you.


After identifying your high varroa hives, the next task is to procure queens with traits that result in lower mite levels.  I admit that hobbyist beekeepers are at the mercy of queen breeders and their advertising.  But there are several queen lines that have been bred with mite tolerance/mite fighting abilities in mind.  Russians, VSH, Ankle Biters, Mite Maulers, Buckfast and Saskatraz are a few that have enhanced mite resistance.  You may know of other survivor stock.


Once you have identified your poorly performing hives, you need proceed to the next step, procure a replacement queen, kill the existing queen, and replace her with the new queen.  Out with bad, in with the good.  If hobbyist beekeepers can’t or won’t do this, then we are all condemned to the perpetual cycle of buying replacement bees annually as varroa and viruses overwhelm a significant percentage of hives each winter even though we religiously apply mite treatments.   Purchasing varroa resistant queens may seem extravagant, but compared to purchasing a replacement package it is better from a financial standpoint.
1 comment:
Email ThisBlogThis!Share to TwitterShare to FacebookShare to Pinterest

EFFECTS OF PROBIOTICS ON BEES submitted by beekeeper Gerard

Beekeeper Gerard was thinking of treating some hives with probiotics in an effort to control Nosema ceranae.  Prior to trying this method he found the following paper on this subject.  For now he has abandoned this idea.

https://www.ncbi.nlm.nih.gov/m/pubmed/26437644/
No comments:
Email ThisBlogThis!Share to TwitterShare to FacebookShare to Pinterest

Good article about hive activity in February in the NATURES NECTAR BLOG.  Better than I could write so I will simply direct you there with the link below.

It was -12F this morning.  Not a day to be outside.  Our bees are all gathered in a tight cluster in their hives.  They will have no problem enduring this cold snap if they are properly fed and relatively mite/virus free.  All that we can do at this point is sit back, worry and wait for spring.

Candle making is a wonderful way for beekeepers to take their minds off the cold and use the wax gathered during hive maintenance and honey extraction processes.  It turns the wax byproduct into something useful and beautiful.

Wax is gathered throughout the summer and fall.  Wax comes from damaged frames, cleaning of the top bars of frames, but primarily from the wax cappings gathered during the honey extraction process.  After being gathered it is washed to remove any residual honey.  Then it is melted; usually twice.  Once to consolidate the cappings into a more manageable mass.  Many beekeepers build or buy a solar wax melter to do the initial consolidation.  It is then usually melted a second time and filtered through cloth to remove contamination.  At this point I usually end up selling the wax in 2 pound bricks.  My customers use it for a variety of uses; making lip balm, making candles, waxing machinery to prevent rust, lubricant, etc.  This helps me offset my other beekeeping expenses.

Beekeeper Gerard goes the additional yard which greatly adds to the value of the wax.  He melts it a third time and makes candles and sells them to the public.  Here is an example of his handiwork.  I'm sure with a little encouragement Gerard would schedule a demonstration for interested parties. 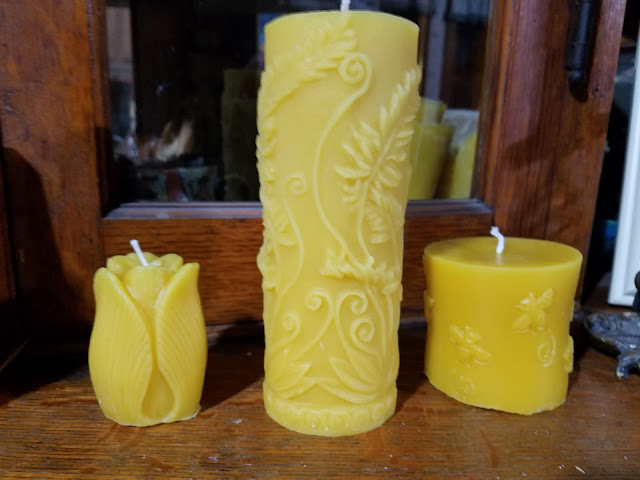 Based on winter survival information shared by beekeepers at the last two ECWBA club meetings I think we should all read the following write-up by Meghan Milbrath regarding control of varroa mite populations.  For you who operate on the Live or Let Die method or just use powdered sugar and don't want to change, then make sure you have set aside money to purchase packages this spring.  For those of you who are tired of losing your bees this article will point you in the right direction.