END OF MAY APIARY REPORT by beekeeper Fred


May has drawn to a close.  Comparing with previous years it seems that this May has been cooler and wetter.  My best guess is that this has slowed hive development by roughly two weeks.  With temperatures routinely getting down into the low 40’s almost every night the bees have been going into cluster to maintain warmth.  This has slowed buildup of the hive population because the size of the brood nest is restricted.  Only in the strongest overwintered hives has buildup been normal.

In my apiary there was one swarm, which I was able to catch.  A second hive probably swarmed based on evidence of queen cells, both capped and emerged, and a falloff in bee population.  I was also able to prevent swarming off a third hive by removing a frame containing capped queen cells and also removing three additional frames of capped brood.  This hive had 12 frames of capped brood cells!   All removed frames were used to strengthen other hives.   These actions weakened the hive enough to stifle its urge to swarm.   Three weeks later they are still in place and have not swarmed.

Some of the overwintered hives have been storing honey in the honey supers.  The strongest hives has placed honey in 7 of 9 frames of its first honey super.  (Note: I run 9 frames in my 10 frame supers.  This makes decapping easier without reducing honey volume.)    None has been capped to date.   This is even before the main honey flow, which is yet to begin.  The cooler weather has delayed appearance of clover, alfalfa, and black locust blossoms.  The only source I am seeing right now is honeysuckle blooming.

Three overwintered hives have gone queenless in May.  So far, I have been able to recover the situation on one of the three; by installing a queen.  I am still working to rescue the second and third hive.  One rejected an added queen.  I am trying transferring in frames of eggs and brood to the third.

My queen rearing efforts have gone poorly this spring.  I haven’t been raising enough queens to even satisfy my own needs.  I don’t understand the exact reason, but I think the cold nights, which cause the bees to cluster, results in the queen cells being abandoned each night and becoming too cold.  Hopefully June will provide better weather and better success in this effort.

What’s ahead for June?


1)      Build up of nucs and new package hives will continue.  Verify they are queenright and add honey supers when the population in the second brood chamber builds to roughly seven or eight frames of bees.


2)      The potential for swarming will continue.  Monitor hives for swarm cells, monitor trees near your apiary for hanging swarms, and have swarm traps in the area to catch any swarms that get away.


3)      Keep a close watch on your honey supers.  Make sure to add additional supers when the top super becomes about ¾ full.  If you don’t add another super, the bees may backfill the brood nest with honey and thus weaken the hive.  NOTE: Just because the top honey super is full of bees does not mean they are putting in honey in that super.  These bees may just be getting away from a congested brood nest.


5)      In mid-JuneI will be performing a 50% strength treatment with formic acid to control mite buildup by using one pad of FormicPro.  (NOTE: Each packet of FormicPro contains 2 pads.)  This will be done to all hives.  The formic acid pad gets installed between the two brood chamber boxes.


6)      Performing mite counts is also recommended.  Mite counts performed by the alcohol wash method appear to give more accurate results, but at the cost of the lives of 300 bees.

New beekeepers follow this link for views of the various types of swarm and supercedure cells.  I have be seeing both types in various hives and nucs.  If you double click on the text below the pictures you will be forwarded to articles providing additional written descriptions.

On the subject of swarm catching here is a link to a YouTube video.

https://www.youtube.com/watch?v=CRl8SP9NkzQ
No comments:
Email ThisBlogThis!Share to TwitterShare to FacebookShare to Pinterest

Captured my first swarm of the season.  Sorry no pictures.  When I drove into the apiary all was quiet.  About 5 minutes later the bee roar started.  Over a period of several minutes a swarm issued from a hive and alit in a close by tree branch about 8 feet high. I scurried around to get the necessary equipment.  Then I backed the pickup underneath the swarm and stood on the tailgate with a cardboard box.  Shaking the branch resulted in a cascade of bees into the box.  They were immediately transferred to a spare hive.  As of 2 hours later they were still in the hive.  I put on a hive top feeder with 2 gallons of 1:1 syrup to keep them contented and to encourage drawing out of comb.  It looked to be about 5 pounds of bees. Its always nice to recover about $130 worth of free bees!

The swarm came out at about 1PM, when the temperature got up to about 65F.  The next four days will be in high 70's to low 80's and everyone should be on the lookout for swarms from strong overwintered colonies.
No comments:
Email ThisBlogThis!Share to TwitterShare to FacebookShare to Pinterest

Follow this link to some timely recommendations for new and overwintered colonies.

Things are really starting to pick up.  We are finally getting warm weather and less rain.   Plum, black cherry, oak and birch are in bloom in addition to dandelions.   A few of the stronger overwintered hives are even putting something in the honey supers.

In my last report I discussed making bee and brood transfusions into a few of the weaker overwintered hives.  This was simply transferring in 2 frames of bees and brood from strong hives to weak hives. Two of the three hives getting the transfusions have started to boom.  Unfortunately, the third went queenless.

While stealing larvae for queen rearing, I noted one of the strong hives had several swarm cells at the bottom of frames.  Some were capped and some uncapped with viable larvae in them.  The hive appeared to be set to swarm in about one weeks time; weather permitting.  I transferred the frames with queen cells to the above mentioned queenless hive.  This action will delay swarming of the strong hive, but probably not stop it.  So I then went in and removed 3 frames of bees and capped brood.  These frames were installed in a new package hive to speed its buildup.

Now that I am seeing swarm cells I will be putting out several swarm traps in hopes o catching swarms from my hives that I may not catch overwise.

I have also been randomly checking hives to verify they are queenright.  In the past week I found two that were not.  One was queenless and the second had a queen but she was not laying.  Previously both hives had multiple frames full of capped brood.  Now most of the brood has emerged.

Here’s what you should be doing in the next few weeks.

1) From the above you can see the importance of checking your hives every other week to verify that they are queenright.  You need to do this to prevent a laying worker situation.

2) The stronger hives also need to be monitored for swarm cells, especially for about the next six weeks when the prime swarm season is upon us.

3) Get your honey supers ready and get them installed on strong hives.  This will lessen crowding, prevent the brood frames from getting honey bound and also maximize your honey crop.

4) Putting out swarm traps baited with brood comb and an attractant.

This Saturday, May 18th, there will be a club meeting at the Caestecker Public Library in Green Lake at 9:30AM.  See you there.
No comments:
Email ThisBlogThis!Share to TwitterShare to FacebookShare to Pinterest

What's Happening in the Hive

This article is from the Stillwater Minnesota area, but has been having weather similar to ours.  There are several helpful hints in the article.


We have now built up to 14 hours of daylight!  If you hadn’t noticed, the bee population also builds up to a maximum at about the same time as the summer solstice which is the longest day on about June 21st.    In our area this also coincides with the height of the honey flow.  Over the eons the bees have amazingly got their population cycle in sync with the sunlight and honey flow.


All of my winter nucs and new packages have been installed in hives.  At this time the winter nucs appear to be about three (3) weeks ahead of the packages in their population build-up.  Both the new package and winter nuc hives will be fed 1:1 sugar syrup until the start of the honey flow.  Then the feeding will stop and honey supers will be installed.


All overwintered colonies have been inspected to verify they are queenright and growing.  In my apiary one colony was found to be queenless and I installed my last winter nuc in that hive.  I thought 4 colonies were building up slowly.  After verifying they were queenright I transferred in 2 frames of brood and bees from strong colonies.  This is called “equalizing”.  It weakens the overly strong colonies and hopefully prevents the strong colonies from swarming.  It also gives the weak colonies a boost and will hopefully get them up to strength prior to the honey flow.  The weak colonies have no problem with integrating the bees and brood into the hive.  The combination of less swarming and more strong colonies will help increase the honey crop.


The overwintered colonies are bringing in some nectar.  I don’t know the source.  To even out my work load I will be installing the honey supers on these colonies soon even though the main honey flow has not yet started.  The first nectar flow will be from black locusts in my area.  This will probably occur in the second half of May.


I also just finished the second of two oxalic vapor treatments on my overwintered colonies.  Its important to stay ahead of the mites.  The new colonies, made with either new packages or winter nucs, did not get this spring mite treatment, but will get treated in early summer.


In the past weak all colonies have been hauling in a lot of pollen.  This bodes well for population buildup.  If only we could get a week of warm, dry and sunny weather. 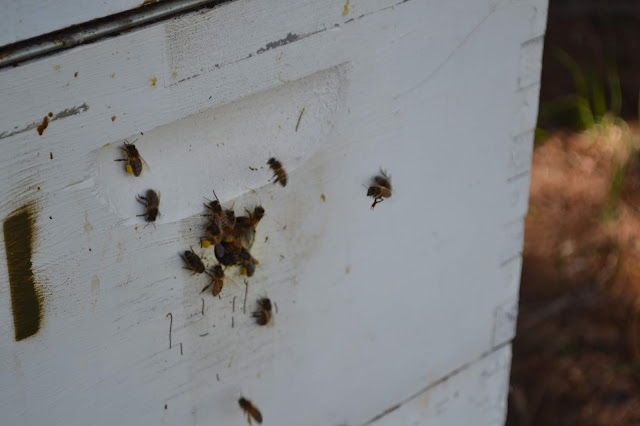 The photo shows approximately 50% of the bees have full pollen baskets.  The other bees are probably taking orientation flights.


So far, during my colony inspections I have seen no queen cells.  Of course, it is still several weeks away from the swarm season.   On about May 15th I will be putting out my swarm traps.  The traps should be installed at least one hundred yards away from your apiary if you hoping to catch swarms emanating from your apiary.   For wild swarms you can place your swarm trap almost anywhere.
For about 30 days after May 15th I will try to visit my apiary at about 10am each warm morning to look for swarms hanging in nearby trees.  Several empty hives and nucs are always kept in reserve to house captured swarms.  Remember the Boy Scout motto: “Bee Prepared”.  Well something like that.