This week I have been applying FormicPro to my hives.  The air temperatures have been within the recommended range of between 60 and 85F.  Hives have reacted differently to the treatments.  Here are pictures of 3 hives that are within 20 feet of each other.  We can all speculate on the reasons for the different reactions. 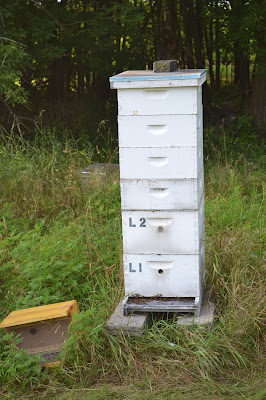 This hive shows no reaction to the treatment. 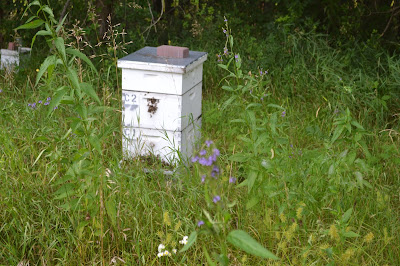 This hive had slight bearding at the main entrance and vent hole. 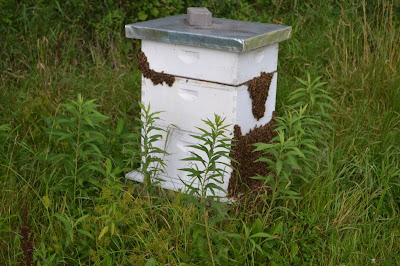 This final hive has heavy bearding on the front and sides.  The bees are about 1 inch in thickness.
NOTE: The next morning all bees were inside again.
No comments:
Email ThisBlogThis!Share to TwitterShare to FacebookShare to Pinterest

In the ECWBA area the weather forecast for the next two weeks appears ideal if you are treating mites with either MAQS or FormicPro.
No comments:
Email ThisBlogThis!Share to TwitterShare to FacebookShare to Pinterest

One of the first signs that the honey flow is winding down is that the stronger hives start robbing from weaker hives.  Today I saw 2 mating nucs being robbed.  Being inherently weaker than a full size hive they are more susceptible to robbing.  Tomorrow morning I will be reducing the entrance size of all nucs so they can hopefully self protect themselves.  These two mating nucs are also located in my main apiary which was probably a mistake.  Most of my mating nucs are isolated and hopefully less prone to robbing.
Of course, the honey flow in your area may still be going strong.  Remember the adage "Location, location, location".
No comments:
Email ThisBlogThis!Share to TwitterShare to FacebookShare to Pinterest

https://www.youtube.com/watch?v=ixmovAZXeyk
No comments:
Email ThisBlogThis!Share to TwitterShare to FacebookShare to Pinterest

Historically speaking the nectar flow in our area begins tapering down in the second half of July.  Most nectar bearing plants reduce flowering after the summer solstice (June 20th).   Combined with the typical reduction in rainfall in late July and August the nectar simply dries up.  Contrary to this, every year is a little different and early July rainfall can extend the flow.  A good beekeeper always wants to leave room (ie an extra super) on the top of the hive for any extra flow.  Empty storage space encourages the bees to work harder and longer trying to fill this space.  This is especially true for stronger hives.

Late August and early September can produce a smaller flow from goldenrod and purple loosestrife ( an invasive species).  The goldenrod flow is very problematic.  Some beekeepers remove their honey supers prior to this flow so that the bees will be forced to store this nectar, if it occurs, in the brood boxes in preparation for winter.

Late July and early August is also the time to treat for varroa mites.  Only formic acid treatments (Formic Pro or MAQS) are approved for use while the honey supers are in place.  This requires removing the hopefully heavy honey supers, inserting the treatment, and then replacing the honey supers.  An alternate approach is to simply remove the supers and extract them if the honey is capped.  The approach you take is up to you as an individual beekeeper.

We can discuss both approaches at the next ECWBA meeting, which will be on July 18th at the Rushford Meadery outside of Omro.  Start time is 9:30AM, but early arrival is encouraged for additional information exchange.  See you there.
No comments:
Email ThisBlogThis!Share to TwitterShare to FacebookShare to Pinterest

Eight  years as a beekeeper and several years of prior experience still doesn't exclude me from making one of THOSE mistakes.

A couple of days ago in anticipation of removing several supers of capped honey, I put my bee excluders on.  I use a triangle board that will let the bees out, but will not let them back in. Note:  Unless you leave them on too long.  I like using the triangle board, its does a very good job and beats brushing each frame off of bees.

Luckily I threw a coat on and put my hood up, even though at the time I felt that it was quite unnecessary.  Usually after a couple of days most of the bees have cleared out and you can just take the super off and the hive is unaware of what your even doing.

I cracked the cover loose and was met with a noticeable roar.  That was my first clue.

I had put the excluder in one of the hives, upside down.  Instead of the bees going down to the super below, they were coming up into the super and unable to leave.  Talk about packed with bees !
Luckily I had a one inch ventilation rim on top and that was packed with bees.

Now you would think that they would of been happy to see me considering their circumstance, but they let me know by way of a couple of stings, that they were ticked off.  I backed off, lit my smoker, put on a pair of gloves and grabbed the bee brush.  After several minutes of rearranging and telling them that I was very sorry for what I did, the hive and super full of capped honey was back in place.

We will try this again in a couple of days.  Grandpa Jack

Not wanting to Grandpa Jack feel all alone I have my own story from today.

I drove over to two of my remote hives.  One hive is working its 5th super, so being an optimist I was going to add a 6th super.    The tower of two deeps and 5 supers is the limit of my lifting capabilities.  I suited up so I could move one of the lower full supers to the neighboring hive which was still working its 2nd super.  Like in Jack's situation the bees were none to happy, but everything went fine.  I had the hives reassembled and bent down to pick up the bricks to secure the covers in place.  Unfortunately I had forget to zip one side on my hood.  Bending over opened the gap. And in flew a bee.  It went straight for my ear.  I was anticipating a sting, but the bugger went straight into my ear.  I think the hair on his body prevented him from backing out.  Expecting a sting any second I drove 5 miles to a neighbor who kindly retrieved the bee without me getting stung!  Whew!  This incident will keep me zipping up the hood for another year.

When beekeepers get into discussions about controlling mites the discussion sometimes turns to tracheal mites.  There are two items of good news on this front.  One, most bees in North America have evolved defensive mechanisms so that tracheal mites are no longer a problem.  Two, some varroa mite control products also control tracheal mites.  Specifically, two fumigant mite treatments, formic acid vapor and thymol, kill tracheal mites.  NOTE: The active ingredient of Apiguard is thymol.  To read more on this topic follow the link provided below.

Thanks to Gerard for tracking down this information.
No comments:
Email ThisBlogThis!Share to TwitterShare to FacebookShare to Pinterest

Being a conscientious beekeeper I try to spread out my hives to minimize drifting.  Some hives are a 1/2 mile away from my main apiary.  This does have its downsides; one being the extra distance to be covered while working the hives.  A second downside is that the hives are away from human habitations and that means wild animals can make unwanted visits.  These two hives had been visited by skunks in the spring. But last night is appears a bear made a mess of these two hives.  Pictures say it better than I can.  A paw print in the middle of one honey frame told the tale. 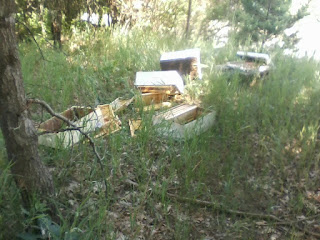 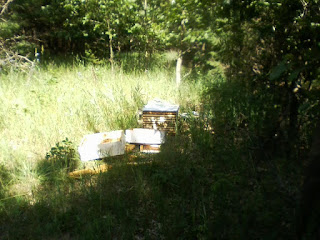 About 15 minutes and a few bee stings later everything was reassembled.  Casualties among the bees were surprisingly few.  Most brood and honey frames were intact.  Queen status will be determined at a later date.
No comments:
Email ThisBlogThis!Share to TwitterShare to FacebookShare to Pinterest
Newer Posts Older Posts Home
Subscribe to: Posts (Atom)