September is drawing to a close.  We have passed the fall equinox and now nights are getting longer than the days.  Forage, other than a small amount of asters, is about nonexistent.  Robbing of weak hives or hives with too large an entrance will be occurring.  What’s happening in your hives?


The bees will only be venturing forth for orientation flights or to gather propolis.  You will be seeing them sealing cracks and plugging entrances in preparation for winter.


The first week of October is a good time to assess the strength of your hives.  I do this by lifting the inner cover and counting the seams between frames that a filled with bees.  8-10 seams equates to a strong hive.  6-7 seams a medium hive.  5 or less is a weak hive that needs immediate attention.  Weak hives usually do not make it through the winter.  Two weak hives can be combined after eliminating one of the queens.  Weak hives can appear to be strong based on activity at the hive entrance.  But this is usually from robber bees entering and exiting.  That’s why it’s a good reason to lift the inner cover and actually see what is happening.  Weak hives this time of year can also indicate high varroa populations.  If you haven’t treated for mites, please do it now, so that your infected hive won’t contribute mites to your neighbor’s hives.


The opportunity for feeding underweight hives is also drawing to a close.   If need be you should get the feeder in place.  Syrup can always be added to the feeder in the dark.   Although sugar syrup may not freeze during October the bees will be reluctant to ingest cold syrup.  Consequently, the syrup may be consumed only during a few hours on a warm afternoon.


The entrance reducer should presently be on and with the 4 inch opening regulating bees movement.  This helps maintain hive warmth and aids the dense of the aid against robbers and hornets.


Mouse guards should go on at about the time of the first frost.  The first frost will trigger the mice to begin looking for winter quarters.  Each week sees overnight temperatures drifting downwards.


The ratio of phoretic mites to bees is also rapidly increasing at this time of year as the hive reduces brood rearing and the hive population declines.  Mid to late October is a good time to do an oxalic vapor treatment or an Apiguard treatment.  Throughout the winter the fewer mites in the hive the better.

For several weeks I have been placing bottles of mixed sugar syrup outside my side door.  Up until today these bottles have not attrached the attention of raccoons, hornets or bees.  Today the bees found this source of "nectar".  Before placing the jugs outside I rinse them with water to ensure they are not sticky.  These jugs are more than 1/4 mile from my hives. 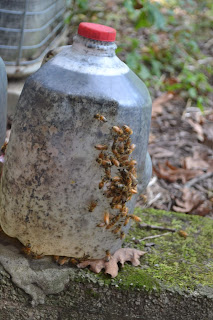 So a word to the wise.  Make sure your entrance reducers are installed; probably the 4 inch opening is OK.  There is evidently very little nectar available in the field.

The monthly ECWBA club meeting will be held this Saturday, September 21st at the Caestecker Public Library in Green Lake.   9:30AM is the scheduled start time.  However, you can arrive early and join others in exchanging ideas.
No comments:
Email ThisBlogThis!Share to TwitterShare to FacebookShare to Pinterest


Its now mid-September.  It’s easy to see the days are getting shorter and nights are cooling down.  The amount of forage, both nectar and pollen, is rapidly declining.  The bees will soon be living on their stored honey.    The hive has also greatly cut back on brood rearing.


In the last week of August, I removed most of the honey from my hives.  I did leave a few supers in place if they had full, but uncapped, cells in the hopes the bees will complete their work and dry and cap the honey cells.  These remaining honey supers will be removed the 3rd week of September.


During the first week of September a number of local beekeepers banded together for an extraction party.  In total we extracted honey to fill 34 5 gallon buckets.  We compared notes and a number of us reported that this year was our best ever as far as the honey harvest, while several others said it was their worst.  Go figure.  We are all located within 5 miles of each other.  Also, a few reported that many packages did not build properly and store a surplus.  Overwintered hives had a definite advantage.


This past week I did my second fall mite treatment.  The first, using formic acid pads, was done in late July.  This past week I did a one-time oxalic acid vapor treatment.  The oxalic acid treatment will be repeated in mid-October and early November.  By early October I am hoping even the Italian queens will have stopped brood rearing.   Thus making the final oxalic acid vapor treatment 100% effective and putting the hives in excellent shape for surviving winter.


As part of my goal to be a sustainable beekeeper (ie not having to buy package bees every spring) I  made up a large number of 5 over 5 double winter nucs.  Last year I had excellent (greater than 90%) survival of winter nucs.  If the same occurs this winter I will have strong spring nucs to replace any hive losses.  In late August and September, I have been feeding these winter nucs in order that the upper box will have at least 25 pounds of honey/sugar syrup.  NOTE: I will be writing another article about winter nucs later this winter.


My queen rearing and mating efforts ended in late August.  I am in the process of combining the mating nucs with other hives or winter nucs.


Several non-performing (ie no honey for the summer) hives had their queens replaced.


What’s ahead for the remainder of September and October?

-If not done already I will be downsizing the entrance reducer to the 4 inch opening.

-Next week I will be removing the remaining honey supers.

-Next I will evaluate each hive.  Does it need feeding?  Is it queenright?  Hives with little honey stores will be fed.  Hives not queen right will be combined with other stronger hives.

-The wax and propolis buildup on queen excluders will be removed prior to storage.  Do NOT leave a queen excluder in the hive.  It may trap the queen below the excluder when the cluster has moved above it.

-Any unused equipment will be inspected, repaired and painted prior to storage so that it will be ready for use next spring.

-Mouse guards and hive wrap will not be installed until early November.