END OF AUGUST by beekeeper Fred


August is winding down.  If you haven’t completed your mite treatments, you are putting your hives in danger for fall or winter failure.  Git er done!  This can’t be stressed enough!


I completed my mite treatments with formic acid pads the last week of July.  However, I will be following up with oxalic acid vapor treatments in mid-September, mid-October and early November.   Overkill?  Maybe, but this process netted me 88% survival last winter.


I just completed removal of the honey supers; well most of them.  Because this August was wetter and cooler than normal, I am finding uncapped honey in the top super.  These top supers I am leaving in place and will be doing a second round of honey super removal in the second half of September.  Even though its late in August there seems to be a honey flow occurring; maybe a rarely occurring goldenrod flow.  Hopefully by the end of September the honey will be capped.  If not, I will use the honey for making mead before the honey begins uncontrolled fermenting and turns into honey vinegar.


With the honey supers removed you will need to assess each hive on its ability to make it through winter.  First, verify the hive is queenright.  If not, either requeen the hive or combine the hive with another weak hive.    If it is queenright, is the population strong enough to make it through winter?  To evaluate the hive partially lift, by tilting the upper brood chamber from the lower brood chamber.  Look in the gap.  The bees should be between the frame gaps of at least seven (7) of the ten (10) frames on both the lower and upper brood boxes.  At this time, also evaluate the weight of the upper brood chamber.  The upper brood chamber should weigh approximately 80 to 90 pounds and be almost entirely honey.  If underweight now is the time to feed the hive 2 to 1 sugar syrup or as an alternate high fructose corn syrup.   Feeding will initiate additional brood rearing and may increase the population to an acceptable level.  Or if you have a strong hive you could steal a frame of capped brood and move it to the weak hive.   See the Nature’s Nectar blog (naturesnectar.blogspot.com/) for more on feeding


A hint on evaluating the weight of the upper brood chambers.  First pull the frames and verify they are honey packed; except for maybe the center 1 or 2 frames.  Each filled frame weighs roughly 10 pounds.  Replace the frames.  Now lift the brood chamber.  Remember the feeling of the full box.  Lower the box back into place. Now as an alternate, just tilt the upper brood chamber.  You only need to lift on the front or side of the box.  You will be only lifting half of the box weight.  Remember this feeling.  From then on you can evaluate the boxes by this method.  It’s a lot easier on your back!


Those of you utilizing 8 frame boxes or medium boxes will need to make your own guidelines.  But you will still need roughly 80-90 pounds of honey for the hive to s.fely make it through a Wisconsin winter.   Our ECWBA President targets for a full upper brood chamber and one full medium honey super.


If needed, feed your hives now while the weather is still warm.  First, the bees will not drink cold syrup.  Second, it takes time for the bees to evaporate the water out of the syrup and raise its sugar concentration to 80% as in honey.  Third, with cooler weather the bees will go into cluster at night and will not be moving the syrup from the feeder to the comb thus greatly slowing the process.   September is the time for feeding.  October temperatures may be too low.


Winter is still a long way off.  DO NOT place hive wraps or BeeCozy’s on the hive yet.

The honey harvesting season is drawing to a close.  One of the associated tasks is to clean the beeswax and propolis off the queen excluders.  The following method works with steel excluders.  DO NOT TRY THIS WITH PLASTIC EXCLUDERS.

Beeswax melts at the relatively low temperature of 140F.  By using a propane torch the beeswax rapidly melts without causing harm to the steel excluder.  I was able to clean up 4 excluders in about 5 minutes. 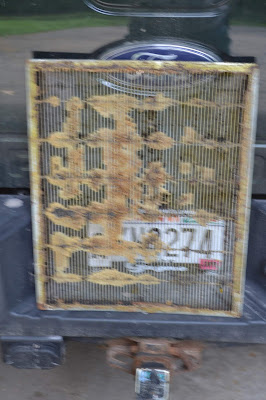 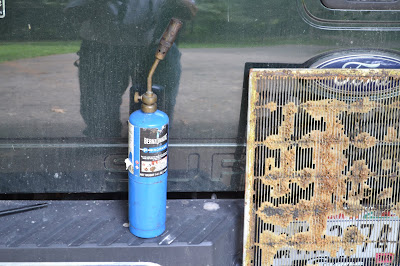 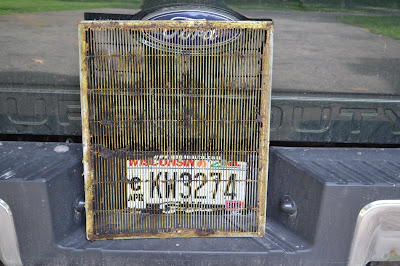 Plastic excluders can be cleaned in the dead of winter.  The beeswax gets brittle at cold temperature, but the plastic remains flexible.  Simply set the excluders outdoors overnight.  In the morning flex the excluder and the brittle wax should flake right off.
No comments:
Email ThisBlogThis!Share to TwitterShare to FacebookShare to Pinterest

There will be a club meeting at the Rushford Meadery this Saturday, August 17th, at 9:30AM. There will be a short discussion period and then we will extract the frames of honey from the two club hives.  If you want to extract your honey afterwards please contact Pam to get your needs on the schedule.
No comments:
Email ThisBlogThis!Share to TwitterShare to FacebookShare to Pinterest

With the season winding down it time to consider a little equipment maintenance.  Here is a recommendation on how to clean goatskin gloves.