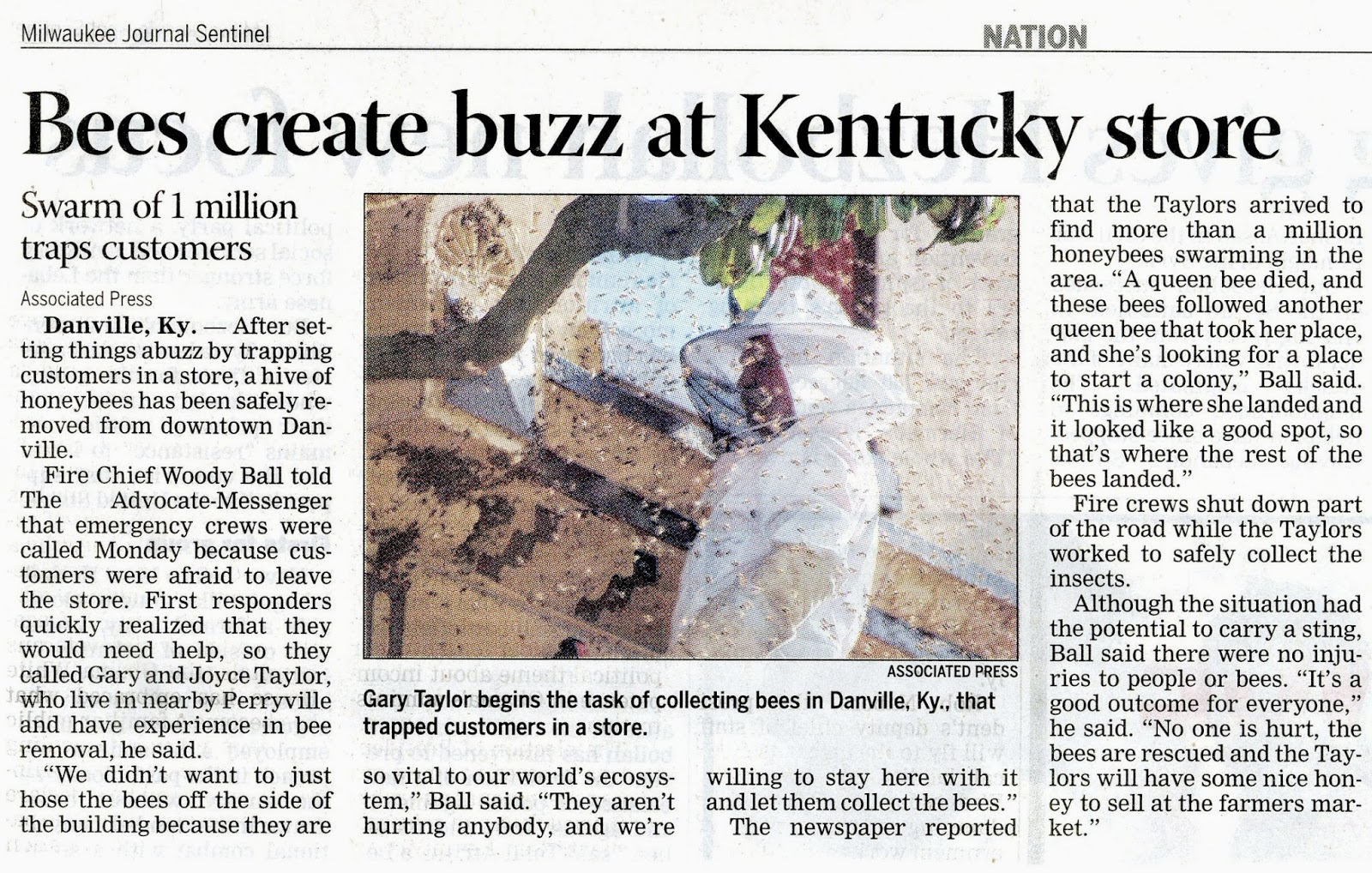 there's some re-queening going on

Did a major run-down of all the hives in the yard this weekend.  MY STRONG (swarm/survivor) HIVE (persephone) got SPLIT.  As I suspected, a hive with this much population - didn't waist any time making some swarm cells.  NOT MANY, maybe 4. (maybe the cold nights slowed them a little) TWO NICE CAPPED swarm cells went into the daughter hive....one for sure, second just in case. (I'll let them figure it out)  In no time, the daughter should be up and running.  Just keeping an eye on these two still wanting to swarm....and if I catch 'em - they're going right back into their box.  I gave both mother and daughter some previously worked frames, but also some foundation to work....and a sugar syrup bucket (to keep their interest inside the hive?)

You know!  it's beekeeping - it's ALL AN EXPERIMENT!  x-ing my finger and toes.

And EOSTRE aka "NASTY HIVE".  she wasn't TOO bad this time...but I soon discovered why.  THEY'RE busy SUPERSEDING.  This is still a really nice sized population - probably #2 in rank.  I'm going to keep them as a 2.5 high all this summer (2 deeps and a super) - see if I can't build up a whopping big hive.  I'm going to keep HIVE BODY SWITCHING this one.  As soon as she gets to the top - i'm going to put her back on the bottom (the queen).

Every hive is ready for a population boom....LOTS of capped brood at every level.  DRONE BROOD CUTS on all.  (and interestingly - I have one hive that's not interested in building drone brood on the bottom of my short frame - it built regular brood cells!)
No comments:
Email ThisBlogThis!Share to TwitterShare to FacebookShare to Pinterest 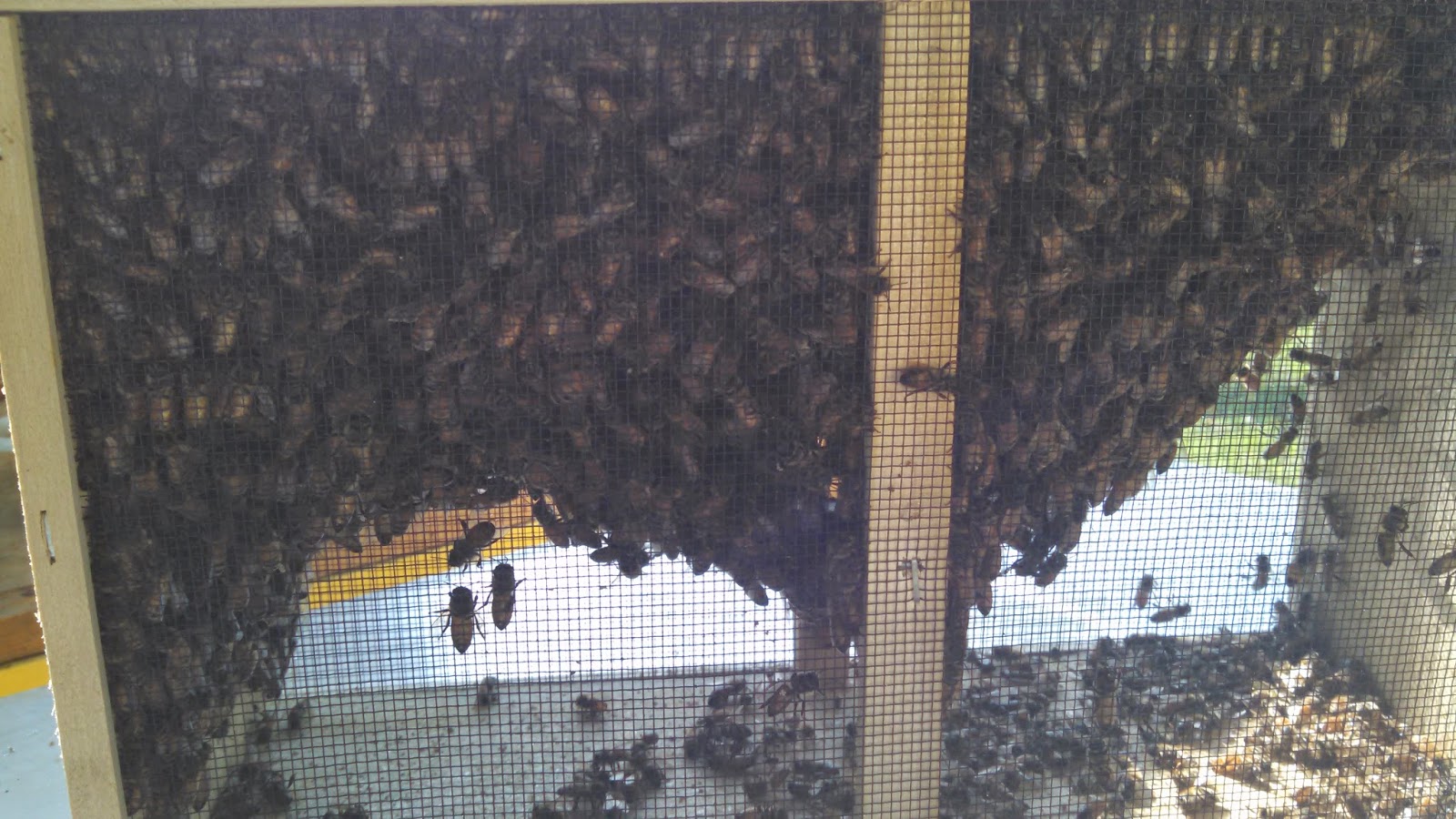 I'm VERY happy with the RUSSIAN PACKAGES FROM WALTER T KELLY.  It's revived my interest in getting packages in the mail.  They arrived a DAY EARLY! and most importantly - in good condition.  They said they ship on Saturdays - that's 2 days in the postal system from Kentucky.

For a while there - it was harder to find producers that would ship to this ZONE.  I'd do this again.

The ability to get different genetics into the area appeals to me.
No comments:
Email ThisBlogThis!Share to TwitterShare to FacebookShare to Pinterest

perhaps a "less chemical" option for around the yard....and a lot less $ than the store bought options:
1 Gallon VINEGAR
2 Cups EPSON SALTS
1/4 C DAWN (or liquid dish soap)
No comments:
Email ThisBlogThis!Share to TwitterShare to FacebookShare to Pinterest

http://www.enn.com/environmental_policy/article/47375?utm_source=feedburner&utm_medium=feed&utm_campaign=Feed%3A+EnvironmentalNewsNetwork+%28Environmental+News+Network%29  These same herbicides are ending up in the pollen - which of course - WE KNOW....the bees carry back to their hives and feed to their babies.
No comments:
Email ThisBlogThis!Share to TwitterShare to FacebookShare to Pinterest 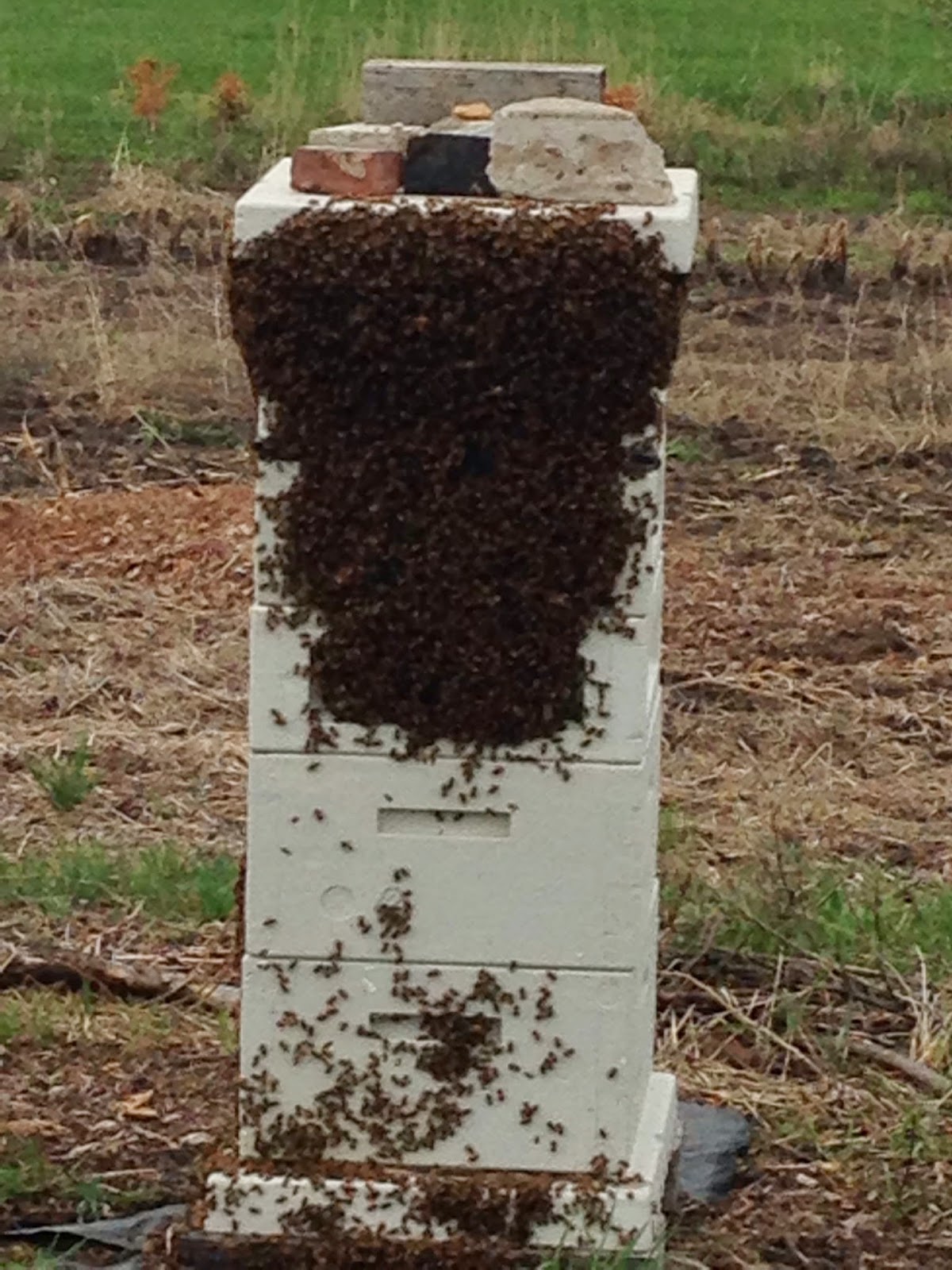 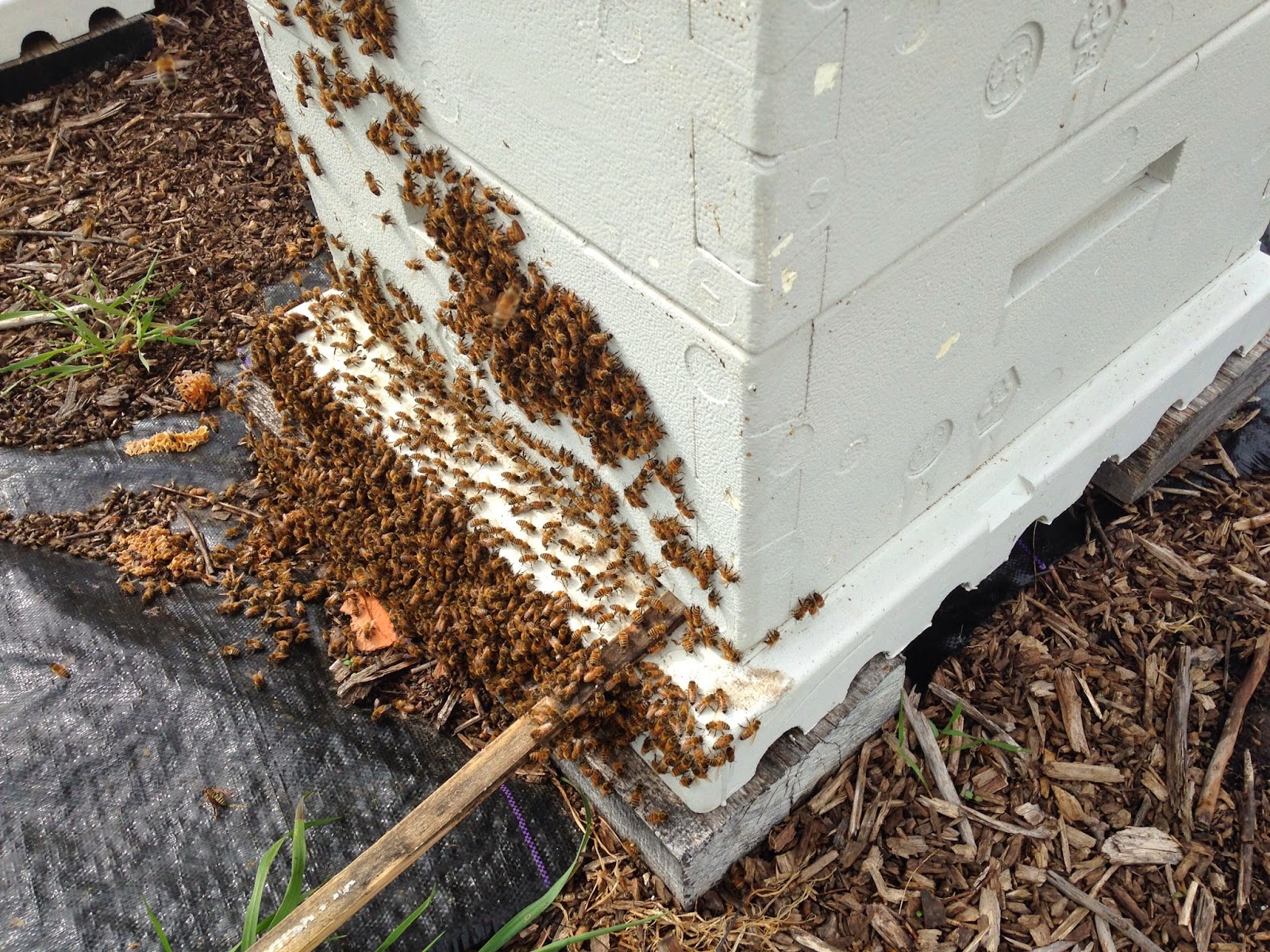 Jesse's going to try her hand a SPLITTING!  wow!!!

Ready for the Season 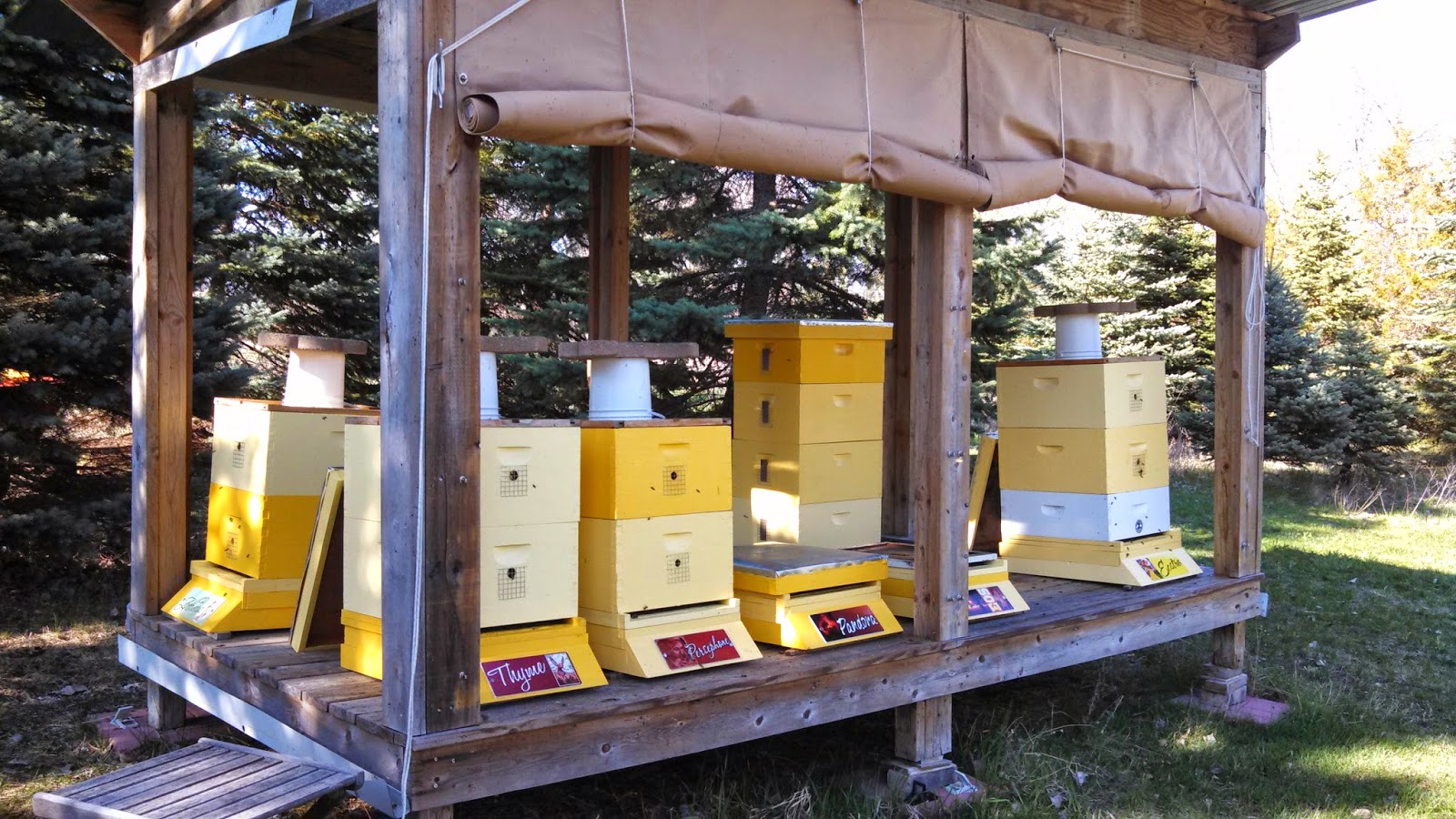 Everyone is in their "refreshed" boxes.  I'd like to say, WOW - what a job this does on the "sticky propolis problem" in the hive! It sure makes the beekeeping much easier - much less PRYING out frames - much less bee crushing.  And like I indicated in an earlier article....you get to have a REALLY GOOD LOOK at every frame as they're moved over.

ATHENA, the only west facing hive has come out of winter relatively SMALL...but they're ready for a population explosion.  For it's size, it has 2 to 3 full frames of capped brood.  Good laying pattern - full frames.

THYME, I believe had a bit of nosema coming out of winter.  Comparatively, the population is better than ATHENA....but the capped brood patterns are small among the frames.  It's not "spotty" - as in a poor layer.....she's just not covering the frames from side to side, top to bottom.  It could be that with our cold nights (still)...the queen is just laying enough - relative to the resources available.

PERSEPHONE is PHENOMENAL.  If there were flowers (nectar)....this hive would be ready to SUPER!  JAM PACKED FULL OF BEES and brood.  My concern for this hive is just trying to "stay ahead" of it - as far as it's propensity to "feel out of room" and make swarm cells.  My (in the back of my mind) desire is to SPLIT THIS HIVE for it's genetics....BUT....we're so far behind already this season.  If I split - it will be next weekend when the two packages are due (pandora, and eos).  A split in the second weekend of May - will mean (potential - it's always a big IF) a naturally requeened hive the second weekend in JUNE.  JUNE, JULY, AUGUST, ~SEPTEMBER.....is this enough time for these two hives to recover in population to get through the coming winter?   ...and then there's always a chance for a "blow-out" - when the queenless hive doesn't requeen.  Also - Persephone got ANOTHER hive body switch - empty frames/cells, put back on top....to encourage the continuance of egg laying.

PANDORA and EOS are awaiting their packages.  2 Russian packages from Walter T Kelly this year.  Trying something different.

And last but not least, EOSTRE.  Eostre is coming out of her 4th or 5th winter....and she's as NASTY AS EVER.  (and population wise - she's as PHENOMENAL as ever)  There's just really something different about these bees.  Last year - I pinched the queen and requeened her with a "Miksa Banded Italian".  All I can figure is they promptly killed her and requeened with their own - because nothing in their temperament changed.  These bees are STICKY!  and FAST MOVING!.  As soon as you pop the top...you've got 20 to 30 bees on your veil....and they're all in STING mode.  Last fall - this hive propolised shut the entire front entrance along the bottom except for a couple holes.  WHO DOES THAT?  Whatever they are....they're consistently making it through winter....ahhh....to split or not to split.....do I really want to DEAL with this behavior?  This is always the hive that I save for last...and have to stand, stare and get my courage up before approaching - they really are that nasty.

Other beekeeping notes:  Noted: newly emerged drones.  I DO the "drone cutout" for mite control...but decided to let them keep a couple hatches of drones this early spring for requeening purposes.  I'm not only thinking of my own hives - but other area hives that might be requeening.  Remember, your beekeeping practices don't just apply to your hives.  Bees are a social insect with a "3 mile distance radius" - you're part of a beekeeping community.
1 comment:
Email ThisBlogThis!Share to TwitterShare to FacebookShare to Pinterest
Newer Posts Older Posts Home
Subscribe to: Posts (Atom)