Earlier this month I posted an article about "ankle biter" bees being raised by Purdue University.  This link provides a short video showing these bees in action against a varroa mite.  Wow!  I think I may try to get a breeder queen from this stock.   I wonder if the ECWBA might sponsor the purchase?

TheSandHill Farm in Munith, Michigan
https://thesandhill.squarespace.com
No comments:
Email ThisBlogThis!Share to TwitterShare to FacebookShare to Pinterest

At the January club meeting there were questions about the availability of northern bred queens.  A few Midwestern queen suppliers are listed in the RESOURCES section of the this blog.  The reader can also do a web search of "Northern Bred Queen Bees".  This will provide group of a half dozen suppliers.  Finally, look at the web site of the "Northern States Queen Breeders Association  (NSQBA.com).  This site has another dozen suppliers from 9 northern states (Wisconsin, New York, Vermont, Ohio, etc.)  The blog editor has had NO experience with any of these suppliers.

Remember that due to the weather conditions in northern states that northern bred queens or nucs are rarely available before mid June.

EDITORS NOTE: Neither the blog editor nor the ECWBA endorse any suppliers or products.

EDITORS NOTE: If any club member knows of other suppliers or has had experience with any of these suppliers, please feel free to send that information to this blog via the comments button at the bottom of this article.
No comments:
Email ThisBlogThis!Share to TwitterShare to FacebookShare to Pinterest

The meeting was called to order at 9:38 by Presdient Jeff Champeau.

VP Fred Ransome and Treasurer George Wigall were not present due to scheduling conflicts.

Discussed the proposed club brochure/flyer.  Patti Igram had previously been authorized to make a prototype.

a) The annual $200 allocation for additional books was discussed.  The decision was to hold off on additional purchases for now.  NOTE: All club books have been donated to local libraries.  A list of the books is in the club blog.

This year the club President and Secretary positions are to be filled for a 2 year term.  Patti Igram was nominated for the Secretary's position.  She accepted the nomination and was unanimously voted in.    As stated previously Jeff Champeau was not standing for re-election as club President.  Thanks Jeff for your service in heading the club as President for roughly the past 8 years.  The potential replacements for President were not able to attend this meeting.  Nominations and the voting for President was deferred until the March meeting.

1) The next club meeting is tentatively scheduled for March 12th in Ripon.  Watch the blog for when this is finalized.

2) The time, topic and location of the spring field day was discussed, but nothing was finalized.  This will be a topic of the March meeting.

3) The Wisconsin Honey Producers Association annual convention will be in Fond du Lac this November.   They have asked ECWBA if we would like to help out.

1) Club members were invited to discuss hive survival in light of our mild winter.  It was brought up that the warmer weather would increase bee activity and therefore the bees would consume their winter stores faster.  Emergency feeding may be in order.

2) There were questions on where to buy northern  queens.  NOTE: The blog lists a few suppliers.

3) There was a discussion about providing speakers for other clubs, schools, nature centers, etc in return for a donation to the club treasury.

4) Is anyone interested in donating land for a fenced club bee yard where demonstrations for beginners could be hosted?

5) Should the club procure observation hives for nature centers or schools?  This lead to the discussion on who would do the periodic maintenance of these hives.

6) How about creating a HOST A HIVE PROGRAM.  What kind of outreach can the club do to find landowners willing to do host a hive in return for some honey rent?

7) Several suggestions on how to improve the blog were offered.
a) Add a BEE FACTS PAGE
b) Add the club's mission statement to the home page.  (The current primary goal of the club is education of current and new beekeepers).
c) Add a CONTACT page with phone numbers and email addresses.

The January club meeting is on January 23rd at the Ripon Public Library.  See the calendar for time and additional details.  The business portion of the meeting will be centered on conducting elections for the positions of club President and club Secretary.  Follow on discussion will probably center on winter survival and spring preparations
No comments:
Email ThisBlogThis!Share to TwitterShare to FacebookShare to Pinterest

After last week's below zero weather I decided to check my hives.  The check is simply listening for the buzz of the bees with a stethoscope.  Luckily in the past two weeks I have not lost any additional hives.

One reason to do these checks is to provide more data prior to making a decision on whether to order spring packages and if so, how many.  The "how many" question is important since package prices have risen again.  Here are the prices quoted by a few suppliers.  Please note that ECWBA does not endorse any suppliers.

For educational purposes I popped the cover on one hive and took a few photos of the bees in cluster. 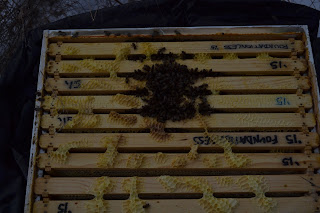 This hive has Primorski Russian stock bees.  This strain of bees winters with a cluster about half the size of an Italian cluster.  The advantage being that they are less likely to run out of stored honey. 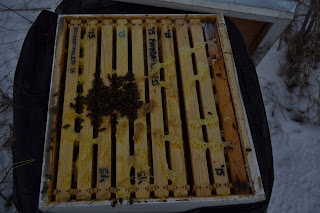 NOTE: The Dadant's listed above is the Dadant compnay, not Lee Hiene.  At this point no one I know has heard if Lee will be selling packages this year.  If you know the answer please reply to this post.
No comments:
Email ThisBlogThis!Share to TwitterShare to FacebookShare to Pinterest

Here is a good educational article about how the genes of the queen and drones actually compete.

BEES THAT FIGHT BACK

Here is an article on a bee strain that actually bites the legs off varroa mites.  This article is from Pennsylvania.  I've also heard of similar bees in Indiana.  There they call the strain "ankles biters".

Here is a second article on the subject.

Another article pointing to neonics.  It may be coming down to the question of whether the EPA will ban neonictinoids or whether they cave to industrial agriculture's desire maximize corn and soybean yields.

What I found to be interesting is the overwintering tests referenced in the article.  EDITOR'S NOTE: I didn't notice this article was dated 2014.  The information is still true, just not current.

Blog editors note: The writer of "Keeping Backyard Bees" is in a southern state.  I doubt very much our bees in Wisconsin were out gathering pollen in December.  The only bees I have seen outside the hive are dead ones in the snow that could not get back to the hive during a voiding flight taken on a bright sunshiny day.  However, at the end of this article are some good pointers about checking your hives for the lack of food stores.

Here in the link to read about 'winter' pollen gathering.

EPA REPORT ON ONE NEONIC

The EPA has issued a report on one specific neonic pesticide which links the pesticide to honey bee declines.  However, to this point other than issuing the reeport they have not taken any further action.  An article summarizing the report can be found via the following link.

Don't think this will solve all your bee problems.  Varroa mites and the vectors (virus', etc.) they carry are probably a bigger issue.
No comments:
Email ThisBlogThis!Share to TwitterShare to FacebookShare to Pinterest

Gerard located this free software that permits tracking of various activities you perform on your hives.  Gerard is planning to sign up.  Maybe we can get him to report on the software at the next club meeting.

January 1st I did a hive check.  The check is simply listening to each hive with a stethoscope.  I have a 1 inch diameter moisture vent hole drilled in the upper brood chamber, so I place the stethoscope on the hole.  Live hives emit a hum or buzz.  Stoney silence lets you know the hive has expired.  For what it’s worth here is the data.

BACKGROUND:
-I had good survival last winter; 100% as of January 1st and still at a respectable 83% at April 1st.
-I am in the process of converting all hives to Russian stock by attrition based on the Russian's purported better tolerance to mites.
-50% of my hives were heavily fed 2/1 sugar water in the fall.
-Many others had a sugar column (modified candy board) added in late November.
-I treated for mites in early September with MAQS, but to three different levels.  Italian and Carniolan hives received the full recommended dose.  Last winter I treated all Russian hives with a 50% dose and had good survival.  This year I thought I would back off a little more and I treated half of the Russian hives with a 50% dose and the other half were left untreated.  I was wondering if the purported Russian attributes are real or hype.
-I do NOT monitor mite levels.  I found the test to be not that accurate.
-I have been tracking the survival of unwrapped versus wrapped hives. Wrapped hives have either a Bee Cozy wrap or are inside buildings.
-My goal, like everyone’s, is to be able to both replace my winter losses and any apiary size increases thru spits and not buy packages every year.

RESULTS TO DATE:
I lost 4 hives in the past 15 days. Total losses since October 1st are 11 of 44 hives.  25%!  Yikes, worse than last year and the winter is warmer and only half over.  But then, I didn't treat for mites in 50% of the Russian hives this year.

Wrapped vs unwrapped.
-Both categories have 25% loss.

Hive Age
Losses were in both 1st and 2nd year hives.  No significant difference noted.
Conclusions to date:
-Wrapping makes no difference at this point.  No difference was noted last winter either.  I will not buy any more wraps.
-Fall feeding definitely helped.  Next fall all hives will get fed.
-Russians are doing better than Italians, when the level of mite treatment is factored in.
-Significantly better Russian survival (87%) when treated with half dose of MAQS versus no treatment (66%).  Next year I will probably treat Russian hives at either the full recommended dose or a 50% level.  I won’t decide on this until spring.
-Russians are not the MAGIC BULLET, but seem to be several steps above package Italians.

-I need to get some software to analyze the data better and determine if any of the many combinations are statistically significant beyond what is obvious.