At the conclusion of October's club meeting we encountered some late fall snow showers.  That's a reminder to us all that winter is on its way.   Despite the snow squall club members loaded 2 1/2 barrels of free sugar into containers; that's about 1000 pounds!  We will try to arrange for more sugar next spring.


I read with interest Randy Oliver’s article in the November issue of American Bee Journal.  He was providing an update on an oxalic acid/glycerin mixture being applied with blue shop towels.  This method of applying oxalic acid appears to still be a work in progress and EPA approval of this method does not appear imminent.

However, he did share data from a two (2) hive test that showed that the repeated application of oxalic acid vapor at two (2) week intervals successfully controlled mite levels and did not harm the hive in any way after 9 applications.  Remember this was limited test with only two hives.  Also, remember that oxalic acid vapor is not approved for use when honey supers are in place.


I would also like to report that beekeeper Jon’s hives are doing very well.  Last year at this time he had lost ALL his hives.  (See 1the 5 November 2017 blog article BIG MYSTERY).  We had attributed that total loss due to trying to control mites via an oxalic acid/alcohol fogging method seen on the internet.  This summer beekeeper Jon changed to oxalic acid vapor as his control method and has got past the crisis period with mostly strong hives.   He has also seen low mite counts when periodically checking mite levels with the alcohol wash method.  Starting with 12 packages in May and doing early June splits he was able to end up with 22 hives going into winter.


In mid-October I applied an oxalic acid vapor treatment to all my hives and winter nucs.   This will be repeated the first week of November, weather permitting, and is my last planned treatment prior to the onset of winter.  Remember that varroa mites are the main transmitters of viruses and the serratia marcescens sacarria bacteria, which is endemic in Wisconsin.


I also applied two (2) inch foam insulation around my winter nucs.  I know what you are thinking; “he has repeatedly stated that winter wrapping is of doubtful value”.   That’s still my position for full size hives, but for nucs, which start the winter with a much smaller cluster, I bent my rule to give the nucs a little help.  This is my second attempt to overwinter nucs.  My first attempt last winter was not successful.  Last year's three (3) nucs succumbed in early January. 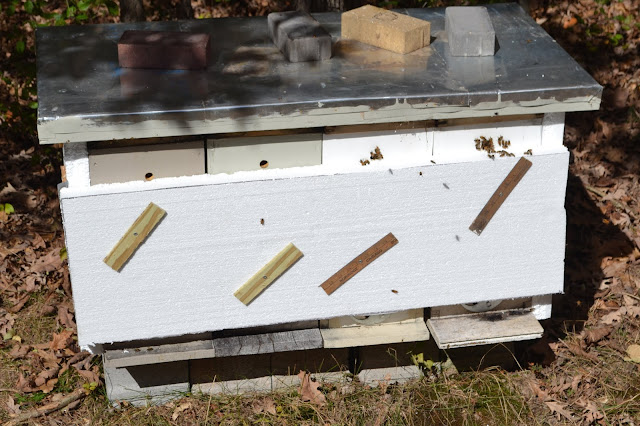 
Presently all my hives and nucs are alive.  The bees occasionally make an appearance outside the hives in the afternoon when temperatures exceed 50F.  But for the most part they will be staying inside the hive for the next five months.


My next task for early November is to reposition the entrance reducers to the smallest entrance size (1 inch) and add mouse guards.


In late November I will be adding a 3 inch spacer beneath the inner cover to allow future addition of  2 ½ pound sugar discs as emergency food which some hives may utilize in late winter.

HOW HUMANS ARE HURTING HONEYBEES

Here is a link to a National Geographic article on how human activity is hurting the honey bee.  Nothing really new, but an interesting article.

https://www.nationalgeographic.com/animals/2018/09/honey-bee-sex-mating-pesticides-humans-news/?user.testname=none
No comments:
Email ThisBlogThis!Share to TwitterShare to FacebookShare to Pinterest

https://www.beeculture.com/catch-the-buzz-sunflower-pollen-seems-to-cause-real-problems-for-nosema-ceranae-thats-good/
No comments:
Email ThisBlogThis!Share to TwitterShare to FacebookShare to Pinterest

Remember that there will be a club meeting at 9:30 AM this Saturday, October 20th, at the Caestecker Library in Green Lake.

Now an unadvertised opportunity for club members only.

We have been able to get some more free sugar.  The shipping containers holding the sugar were punctured during handling and the sugar is considered “NOT FIT FOR HUMAN CONSUMPTION”.   It may have a little dirt from the floor mixed in and normally it goes to the landfill.   We are able to get it for feeding to our bees.   Many members have been using the sugar from this source for several years.  Personally I have never seen any contamination in the sugar.


Yes, its late in the season for feeding your bees but I bet you all have some empty containers that you can store the sugar in for use next spring or for making sugar discs for mid-winter emergency feeding.


It will be distributed at the club meeting this Saturday, October 20th, AND ONLY THIS SATURDAY.  It is being done this way so all club members have the same opportunity and so I won’t be hassled with a bunch of individual requests.   The initial limit is 10 gallons of sugar (roughly 50 lbs) per member.  Once everyone has had a chance for the initial 10 gallons the remainder will be available with NO limit.  Bring as many containers as you want.   The tote of sugar weighs roughly 1500 lbs, so all club members with containers should be able to get at least two 5 gallon pails full.  The remainder will be distributed equitably.   A donation to the club treasury of a few dollars is recommended or you can donate one pound of honey with your label (honey is preferred).  Only one donation is requested regardless of the amount of sugar you receive.  Remember 50 lbs of sugar costs $18-$25.  The honey will be given to the source of the sugar as a holiday gift for his effort on behalf of the bees.


Remember this sugar is NOT for human consumption; its for the bees.
No comments:
Email ThisBlogThis!Share to TwitterShare to FacebookShare to Pinterest

Follow this link to an excellent writeup on treating your bees one last time using oxalic dribble or oxalic vapor.

Here is an interesting article that shows bees fed fungi had significantly lower DWV levels!  Follow link to the article.

https://phys.org/news/2018-10-fungus-powerful-medicine-honey-bee.html
No comments:
Email ThisBlogThis!Share to TwitterShare to FacebookShare to Pinterest


Its now early October and we have seen nighttime temperatures down into the 30’s.   Only a few asters remain blooming.


For once I followed my own advice and on October 2nd went out and graded the hive strength of my hives.  A week prior I had been removing the feeders from my hives and felt that most hives would be strong.  I started the grading at about 11AM.  The air temperature had increased to a cool 48 degrees F.  The first hive I looked at only had 5 frames of bees when I raised the inner cover.  The bees were not roaming about under the inner cover.  This shocked me a little since this hive had produced 3 supers of honey and had had a strong population throughout the summer.  Then it dawned on me that the bees had drawn up into a cluster to maintain warmth around the brood nest area.


On my first go through of the hives there were roughly 29 strong, 6 medium and one weak hive.  All hives I had graded as medium were in cluster.


About 1 1/2 hours later, I returned to one of the medium hives because I had noted too many uncapped honey cells in the upper brood box.  The temperature had increased above 50 degrees.   When I lifted the inner cover to install the feeder the bees had broken cluster and now filled the entire hive.   I rechecked the medium hives and they had all broken cluster and were occupying the entire hive.


Based on these secondary findings 35 hives were graded as strong with addition of one weak hive.  This is the best conditions my hives have been prior to winter.  I attribute this to the feeding I  did after removing the honey supers and feeding of all start-up hives.


Now to the weak hive.  This hive had been troublesome ALL spring and summer.   It had barely survived the previous winter.  I should have taken two actions then and there:  1) I should have replaced the queen.  2) I should have added brood from other hives several times.  Being a softy, I wanted to give the queen that had overwintered the benefit of doubt and give her a chance to rebuild the hive.  It wasn’t until mid-August that I finally replaced her.  However, I still didn’t add any brood.  By August and September, I was worried about weakening strong hives by robbing brood to aid this weak hive.  In hindsight I should have known a strong hive could spare a frame of brood without a problem.   The hive even told me it was in trouble when it did not quickly consume sugar syrup I offered in late August.


What are the lessons learned from this fiasco?  First, I should have replaced the queen in all hives not showing a continuous population buildup through May and June.  Two, just like helping weak hives with brood transfers in the spring, weak fall hives can also be helped by adding brood from strong hives.  I had hesitated doing this because I did not want to weaken any of the strong hives.


There are 4 remaining tasks yet to do in my apiary during late October.


1)      Reposition the entrance reducers so the smallest (1 inch) opening is controlling bee movement.


3)      On a warm day I will be giving each hive a oxalic acid vapor treatment to knock down the varroa mite population one last time.  A warm day is preferred in hopes that the bees won’t be in a tight cluster.  This allows the oxalic acid vapors to coat every bee and any attached varroa mites.


4)      I will continue feeding the 12 winter nucs until they no longer take the sugar syrup.  The cooler days have already slowed the consumption of sugar syrup by 75%.