the swarm MOVED BACK HOME!??? the blank hive is blank again. ....i'll probably catch them in the act again today...going home for lunch.
1 comment:
Email ThisBlogThis!Share to TwitterShare to FacebookShare to Pinterest

walked right past it.

SWARM....the now 2 high (3 high)....i walked right past it. they were conveniently hanging on the elm by the bench (in front of the hives). used my uncapping tank/tub...shook them in....took them over and dumped them into the now occupied BLANK hive.

...sure hope that foundation comes sooooonnnn!
No comments:
Email ThisBlogThis!Share to TwitterShare to FacebookShare to Pinterest

Photos are posted at the picasa gallery (link on the right sidebar)
No comments:
Email ThisBlogThis!Share to TwitterShare to FacebookShare to Pinterest

Field Day at the "beehouse" 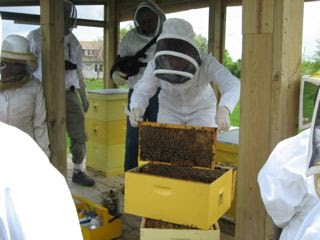 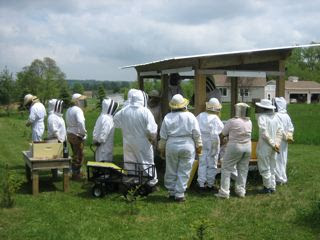 We examined my 3-high (3 deeps) hive.....as i "wanted" out of this experiment....IT WAS WHOPPING FULL OF BEES! at EVERY level! We found capped brood in 2 levels - solid frames....we also found a good half-dozen of swarm cells....and what didn't we find??? eggs and larvae. THIS HIVE IS IN SWARM MODE...the queen has ceased laying - in her attempt to slim down for the flight.

What did we do? we SPLIT it. we took one layer and started a new hive....we made sure we grabbed two frames (with swarm cells/new queens) and put it in the new split...MADE SURE the existing queen wasn't on these two frames!

What happened after everyone left? The (now) 2 high hive with the queen - was doing some serous BEARDING outside the hive....they're gearing up, i'm afraid.
We also left a couple of swarm cells in the "mother" hive in case of this exodus. remember, the old queen leaves...and if we'd not left SOME swarm cells - this hive could potentially go queenless.
i just hope i can catch them in the act today! (gotta go home for "lunch")

HINDSITE 20/20. this hive was AMAZING in it's population. the beekeeper should have done another HIVE BODY SWITCH 3/4 weeks ago!...and SUPER'd IT!

MY EXPERIMENT....i really wanted to see how many bees i could "get" in a box. with this queen and all the capped brood....i could have made a 4 high hive!
....need to build frames!...more wax foundation on the way!!! i hope it's in the mail today!!!
No comments:
Email ThisBlogThis!Share to TwitterShare to FacebookShare to Pinterest

A Swarm in May


It being a Proverb, that a Swarm of Bees in May is worth a Cow and a Bottle [bundle] of Hay, whereas a Swarm in July is not worth a Fly.
[1655 S. Hartlib Reformed Commonwealth of Bees 26]

‘A swarm in May is worth a load of hay; a swarm in June is worth a silver spoon; but a swarm in July is not worth a fly’—for it is then too late‥to store up‥honey before the flowers begin to fade.
[1879 R. Jefferies Wild Life in Southern County vii.]

As she reminded the children: A swarm in May's worth a rick of hay; And a swarm in June's worth a silver spoon; while A swarm in July isn't worth a fly.
[1945 F. Thompson Lark Rise v.]