http://www.thedieline.com/blog/2012/3/22/student-spotlight-stella.html
No comments:
Email ThisBlogThis!Share to TwitterShare to FacebookShare to Pinterest

45 hives is a nice amount of bees in a rural enviroment...BUT NOT IN TOWN!!!!
http://newyork.cbslocal.com/2012/08/22/neighbors-abuzz-as-millions-of-bees-removed-from-queens-home/

it's an "issue" this year....join in our DISCUSSION GROUP!
No comments:
Email ThisBlogThis!Share to TwitterShare to FacebookShare to Pinterest

Expect a similar meeting schedule for 2013 as we had for 2012:  January, February, March, May (field day), July, and September.  Let me know if you have any topics of subjects you would like to see covered.  I will try to schedule something for it.
2.  Denise Palkovich gave a very informative presentation about the association’s blog and website at the July meeting.  Thank-you to Denise for providing this communication tool for the association.
3.  An unscheduled guest speaker, Andy Miksa, of Andy Miksa Honey Farm, delivered a short presentation on his queen rearing operation.  He is currently setting up his commercial queen rearing operation here in Wisconsin and plans to have queens available for sale during the 2013 season.
4.  All ECWBA members with internet access are encourage to log into the blog and participate in the dialog and discussion section of the site.  This is a place where questions can be answered in a public forum.  Here is the website address:
http://ourbeeblog.blogspot.com/
5.  As a result of discussions at the July meeting, we have decided to add some lists to the information available on the association’s blog.  Here are the list categories and a brief description of each:
If you want to be on any of the above lists, please contact Denise Palkovich by e-mail at:
d@dsignsunlimited.com .  Please include your name, contact information, and the name of a town(s) in the area you prefer to service.  Denise will post only first names with phone numbers and e-mail addresses along with the area you want to service.  We will also have a sign up list for each category at the September meeting.
6.  At the January, 2013, meeting, the offices of vice-president and treasurer will be up for election.  The positions are currently held by Denise Palkovich as Vice President and George Weigel as Treasurer.  Both, Denise and George, have done a great job as ECWBA officers for their past two year terms.  Here’s an opportunity to become directly involved with the ECWBA.  Please consider running for either of these offices -- a little “electoral competition” would be great to see.  If you have any questions about the election or about becoming an officer, please contact Jeff Champeau by phone or e-mail.

7.  The ECWBA has established an informal committee to explore the possibilities of sponsoring a beekeeping class in the early spring of 2013.  There are currently four members on this committee, but there is no designated committee chairman as of now.  If you would like to join in on the class committee, contact Jeff Champeau.  This committee is exploratory for now.  The committee will present information at the September meeting and the general membership can decide by vote whether to formalize and fund the committee.
No comments:
Email ThisBlogThis!Share to TwitterShare to FacebookShare to Pinterest

Bees check in at the Waldorf 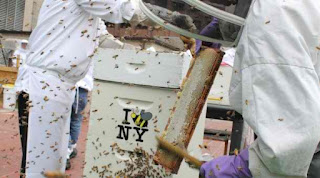 it's raining somewhere in the world

while we've been having a draught....the UK has been WET
here's a link to what's going on in beekeeping there.
http://www.telegraph.co.uk/gardening/beekeeping/9444020/Beekeeping-Diary-Its-getting-late.html

too funny - from our canadian beekeeper

Isn't this just HOW BEEKEEPING GOES?  the strong hive doesn't make it - the weak hives does....

The MOTHER HIVE - which i'm SO HAPPY i took splits from early this year....is "dead".  I put the clearing boards into the hives this weekend and did a little inspection (the clearing boards are the "bee mazes" that clear the supers of bees - readying them for harvest)

When I lifted the 3 supers off the mother hive (yes - they were at one time strong enough to make honey!)....I knew there was a problem...because I could SEE DOWN to the bottom board - through both the deeps.....very few bees.

So I immediately went to the HEART of the hive - the frames that SHOULD have brood activity on them....in both deeps - nothing but STORAGE ON ALL FRAMES - no brood anywhere.  This hive has been queenless for SOME TIME.

I took the two deeps - full of FOOD...and a handful of bees....and SPLIT THEM between two other hives.  In other words - I COMBINED using the newpaper method.  These two other hives were splits from this hive earlier in the year...and they'll now overwinter as 3 DEEPS.  Since the deeps from mother hive were full of honey/pollen....they'll have a head start on extra stored food for winter.

I really like overwintering as 3 deeps....it makes for an "easier split" come early spring....you'll have all kinds of extra drawn frames and food to FRANKEN SPLIT them :)  By franken split - I'm referring to making splits or 10 frame "nucs" by grabbing frames/eggs from THIS hive and THAT hive to force them to make new queens....

I've also gone to 9 FRAMES in all my boxes.....I REALLY like that too!  It makes inspection SO MUCH EASIER.  There's WAY LESS BEE CRUSHING.

I'm harvesting next weekend.  REALLY early for me!  why?  with how EARLY the season came - I'm afraid it might end early as well.  The swallows have been packing up for 3 weeks now, geese are on the move...it's EARLY.  With the draught - I want to get the honey off....WHILE THEY HAVE SOME RESOURCES LEFT.

There are other "wives tale" signs out there that we're in for a "BAD" winter....(by bad - does that mean snow or cold?)....the ASH TREES ARE LOADED with berries...and the bees have REALLY STUCK THE HIVES TOGETHER WITH PROPOLIS...is it a sign?
2 comments:
Email ThisBlogThis!Share to TwitterShare to FacebookShare to Pinterest
Newer Posts Older Posts Home
Subscribe to: Posts (Atom)