We've recently moved households - so I've not seen "the girls" for a month or more. I harvested early so they'd have every opportunity to fill reserves for winter. The bees will REMAIN in place until spring. I've decided it'd be best to move them in spring - when there are LESS of them (cross your fingers moment - as every beekeeper knows).

I donned the new MESH beekeeping jacket and went for my first fall inspection and feeding. The day before I'd checked to see if all was well in the hives - if anyone was home. Looks like we'll be overwintering 5 hives this year. The population in one was FABULOUS....the others were GOOD and about equal. Now - I overwinter as 3 deeps...let me tell you once more how )(*@#)$*$ heavy those deeps are when they're full of honey!!!!!!

Before feeding them - I wanted a closer inspection without tearing them apart frame by frame....so I cracked them open - tipped the whole box and inspected top down and bottom up between the frames. Everything appeared as it should....the BROOD NEST is in the bottom box, a little into box two....and honey all above. The mass of bees were right in the middle frames where they should be.

I DID NOTE some wax moth "issues" in cleaning out the screened/sticky trap. There was some webbing. but webbing was not noted in between frames or in between boxes. I'm hoping it will be soon be cold enough to freeze them...and the bees will take care of the rest....they're population deems them able.

After inspection, I put the medicated (nosema) bucket on them...and crossed my fingers. as a three deep - they don't require xtra feeding - but I did want to get the meds in.  The final touch to the hive was the entrance reducer.  The VERY POPULATED hive didn't think this was a good idea (hammer and nails)  They came pouring out the hive and freaked out the guy helping me (the new owner of the house).  I said, "SMOKE 'EM - mommy don't play that game!"  That ended THAT.

And finally - I put the sides of the BEEHOUSE on....and rolled down the canvas front to just above the hives.

My helper - who will no doubt be beekeeping himself soon...asked, "Do you do any beekeeping in the winter?" I said - sure - but not at the hive, it's a time for READING and REPAIRS (to equipment).  Though - I do sometimes go to the hives with a stethoscope and listen for them....

If the QTY OF PROPOLIS is ANY INDICATION of the winter we're going to have...it's gonna be a "good one"....COLD or SNOWY - they couldn't tell me.
No comments:
Email ThisBlogThis!Share to TwitterShare to FacebookShare to Pinterest

My new bee suits arrived...the last I'll probably ever buy.  They won't shrink! This shows beekeeping TECHNOLOGY.it's 3 layers of mesh that allows air to flow through...but keeps stingers at a distance. It's definately heavier. I got one suit and one jacket....i got them a little too big....for guests. They feature velcro closures at wrists and ankles.

your hive is ALIVE during the winter months.  Warm Inside - Cold Outside = CONDENSATION.  it's important to allow the moisture out of the hive.... 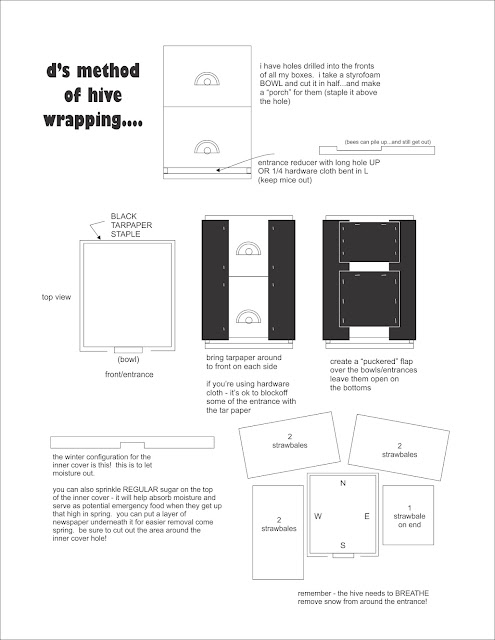 hope you find this useful.  some years...the bees will propolis my holes shut - i leave them that way - figuring they know best.  i proceed as "normal" and let them reopen the holes as they need it.  if this doesn't print well for you, let me know - i can send you a pdf.
No comments:
Email ThisBlogThis!Share to TwitterShare to FacebookShare to Pinterest
Newer Posts Older Posts Home
Subscribe to: Posts (Atom)