Beginning in September the bees will begin raising their "winter bees", which have special traits to withstand the long winter.  You want your winter bee larvae to have a minimum exposure to varroa transmitted viruses.  The following week is about the last week to treat for varroa so that the exposure to viruses is minimized.  Failure to treat will almost condemn your hive to death by viruses in January or February if not before.  If your hive succumbs in September, October or early November many of your infected bees will flee to neighboring hives (both your's and your neighbor's hives) with their load of varroa and viruses.   Do the right thing and treat your hives now!!!
No comments:
Email ThisBlogThis!Share to TwitterShare to FacebookShare to Pinterest

Here is an interesting article on other pollinators.

https://www.nytimes.com/2018/08/21/science/bees-pollination-farming.html
No comments:
Email ThisBlogThis!Share to TwitterShare to FacebookShare to Pinterest


Honey needs to have a moisture content of less than 18.6% in order to avoid fermentation.


The bees know their job.  They will not cap honey if its moisture content is too high.  They do not want their winter stores to be sour or alcoholic!


A beekeeper that extracts only capped honey can be assured that the moisture level will be below the 18.6% limit.  To ensure it remains below 18.6% the honey should be stored in a sealed container.


When removing frames from a hive the good beekeeper leaves on the hive the frames that are not capped.   Given more time the bees may yet cap this honey.


However, many frames of honey contain a mix of capped and uncapped honey.  The rule of thumb followed by most experienced beekeepers is that at least 90% of the cells on the frame should be capped in order for the frame be harvested.  In that way the low moisture honey balances out the high moisture honey.


In the same thought process a fully (100%) capped frame of honey could balance an 80% capped frame.  While extracting frames with uncapped cells the beekeeper needs to ensure at least 90% of all frame area is capped.


However, utilizing uncapped honey increases the risk of having honey with more than 18.6% water.  It is a good idea when done extracting to check the water content using a refractometer.  If your honey turns out to be over the limit it must be used quickly to avoid fermentation.  There is no better way to lose your customers than to sell them fermented honey.  Ugh!

FROM THE APIARY-LATE AUGUST by beekeeper Fred


This year, in recognition of the varroa epidemic, I have altered my late summer beekeeping methods.  In previous years I had removed the honey supers in mid-August and then treated for mites.  This year multiple mite treatments were the order of the day.  In early summer I had applied a ½ dose of FormicPro.  Then in the last week of July I applied a full dose of FormicPro.   Although it requires more work on the part of the beekeeper I laboriously removed the honey supers, split the brood chamber to insert the miticide and then immediately reinstalled the honey supers.  Please note that formic acid treatments are the only ones certified for use while the honey supers are in place.  With my mite treatments done I could hopefully gain additional honey flow in August from alfalfa, goldenrod, knapweed and Joe Pye weed.


Most of the honey my bees have gathered has been by overwintered hives.  Hives with new packages were slow to build up and consequently have yielded little honey.  I would say that 75% of my new packages did not put anything into honey supers.  The best hive in the remaining 25% of packages yielded about 1 1/2 supers of honey.   My packages were received May 1st this year.  Next year I plan to request packages at the first available date; usually about April 7th.  This entails a bigger cold weather risk, but gives the hive an additional 3 weeks of buildup time so that they can be up to full strength in time for the start of the honey flow in mid-June.


In early August I set up 12 nucs for overwintering.  These nucs are double deep 5 frame nucs (10 frames total).  I have started treating these nucs with oxalic acid vapor to minimize any mites.  My first attempt at overwintering nucs last year was not successful.  They expired in January, which is when varroa related diseases also begin killing full size hives.   If I get these nucs to survive I won’t need to buy packages in the spring.


In mid-August I started to feed 2 to 1 sugar syrup to several June start-up hives and to any hive that has not been putting honey into honey supers.  This feeding will continue until the hive doesn’t take any proffered feed.  It takes time and warm weather for the bees to dry the syrup to the 82% sugar concentration needed for safe storage.  Don’t wait too long because cold weather will result in the bees going into cluster and ignoring the feed.


While feeding the hives I also take the time to evaluate the strength of each hive.  There are several weak hives that will be culled or combined prior to winter.  Even so I am treating them with formic or oxalic acid vapor to ensure that if they collapse that they will not become a varroa bomb and infect my other hives.


-Now I am simply waiting for the end of the goldenrod nectar flow.  Then it will be time to pull the honey supers and have an extraction party with other local beekeepers.  This will be sometime in early September.


-After removal of the honey supers I will offer each honey producing hive a sugar syrup top off.


-The top honey producing hives are also the top varroa producing hives.  I will be performing alcohol washes on about 6 of those hives to ensure the varroa populations are below acceptable levels.


-In the second half of September and late October I will hit every hive with several oxalic acid vapor treatments.  Although I can’t prove it I don’t think I lost any queens this summer as the result of either formic or oxalic acid treatments.

Heritage Honeybees has notified ECWBA that they will be offering free beekeeping classes this fall.  This would be ideal for someone interested in starting beekeeping next spring.  See info below.  NOTE: ECWBA endorses no suppliers or their products.   Also, ECWBA does not know if this class would qualify for Fond du Lac's class requirement.


We now have registration links posted on our website (www.heritagehoneybee.com) under the "Classes" tab for our free 3-part beekeeping class.  The class is designed for the beginner up to the veteran beekeeper and will cover:
We are offering the same 3-part class on two separate schedules.  Choose one of the following when registering on the website:
Thursdays from 9am-4pm on Sept. 13th, 20th and 27th
or
Saturdays from 9am-4pm on Sept. 15th, 22nd, and 29th
We will provide coffee, tea, water.  Please bring a sack lunch.  Class registration will close once the class size reaches 40 for each series of dates.
Pass this along to anyone you know who is interested in becoming a beekeeper or wants to learn more.

This article indicates that bees do not always raise emergency queens from eggs containing a high commonality with their own genetics.

To me this is not so surprising.  Everyone knows the queens mates with multiple drones.  Also research has indicated the sperm do not readily mix.  Therefore at any given time the nurse bees that would be raising an emergency queen probably have difficulty finding eggs with both the right genetics and also of the right age (0 to 1 days after hatching) to raise into a new queen.
No comments:
Email ThisBlogThis!Share to TwitterShare to FacebookShare to Pinterest

THE SUPER BOWL OF BEKEEPING

Follow the link to an article in the New York Times.  Sometimes you wonder if their fact checkers are at work.

Many beekeepers feed their hives during the late summer and early fall to improve the chances of winter survival.  Most beekeepers use a 2 parts sugar to 1 part water solution for the feeding.  Either cane sugar or beet sugar are acceptable.  GMO (genetically modified) beet sugar has been found to have NO adverse effect on the bees.   Other beekeepers use fructose (corn syrup).  Fructose syrup is more expensive, but its sugar concentration is higher and it therefore takes the bees less time to process the fructose up to honey sugar concentration levels.  Remember the bees must dry nectar and any other food until it is roughly 82% sugar and 18% water to avoid fermentation.


Experienced beekeepers can tell by the heft of the upper brood chamber whether feeding is necessary.  The upper brood chamber should weigh about 90 pounds in order for the bees to have sufficient stores to make it through winter.  Spending $10 on sugar in the fall can prevent starvation and the need to buy a $125 package of bees in the spring.   Commercial beekeepers simply feed all hives to minimize losses.


Feeding the bees in the fall is like another nectar flow.  The bees will naturally respond to a nectar flow and begin to raise more brood.  More brood means more MITES!  Mite control philosophy has been evolving and now recommends fall feeding be accomplished in late August and early September.   Delaying feeding to late September or early October gives the mites an extended period to raise mite brood and results in higher mite populations throughout the winter months.  Mite control recommendations now suggest mite treatments be applied in early to mid-August to give the winter/fat bees the best chance to be virus free.  Continuing to feed into October simply gives the mites a longer time to rebuild their populations prior to the naturally occurring bee brood break, which limits mite population growth.

Here a bunch of statistics about hive losses from the USDA.  Again the primary reason listed for losses in varroa.

https://www.deltafarmpress.com/usda/9-points-honey-bee-colonies-report
No comments:
Email ThisBlogThis!Share to TwitterShare to FacebookShare to Pinterest

This week the ECWBA has had a booth at the Green Lake County Free Fair.  Like all public events there were periods of boredom and of hectic activity.  Thank you to all club members that put in a little time supporting this activity.  There is still time to put in an appearance.  As a minimum its a good place to discuss beekeeping questions with your fellow beekeepers. 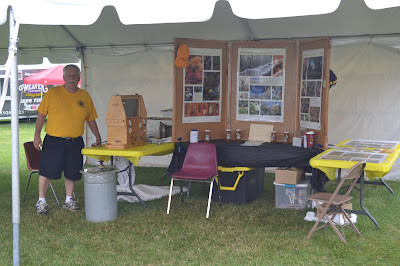 Al manning the booth during a slack period. 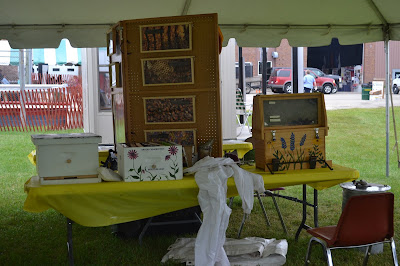 Side view.  The observation hive was a hit again this year. 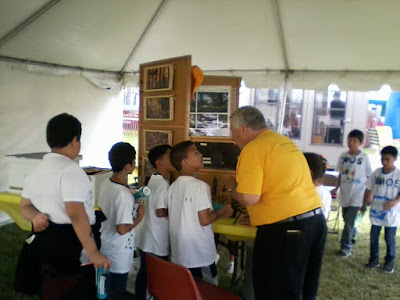 Al explaining the activities going on in the observation hive to a number of small children. 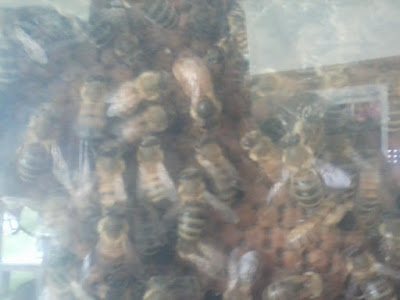 The queen and her court.  The kids were excellent in quickly spotting the queen.