AUGUST IS UPON US

August is here.  Typically central Wisconsin will be seeing a drying out period.  Consequently bee forage will be on the decline and honey gathering will slow.  There are still a number of plants providing nectar and pollen, but just not in the quantities seen in June and early July.  Here are a few of the plants the bees are working.  Two agricultural plants can also provide nectar; alfalfa and soybeans. 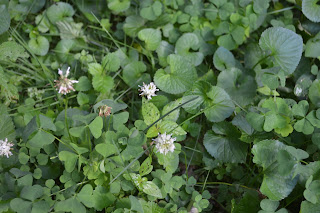 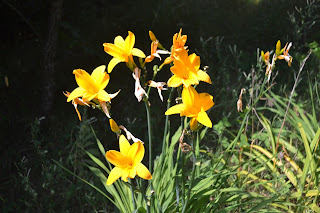 DAY LILIES ( I have never seen bees work these plants) 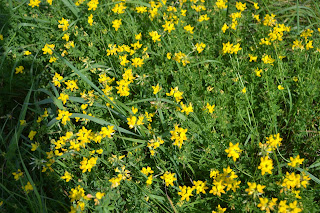 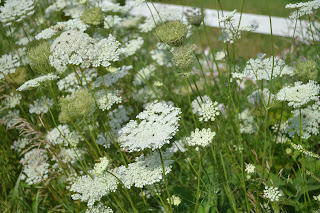 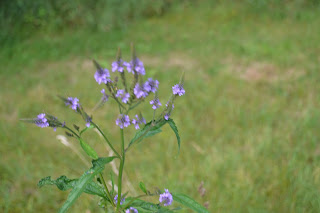 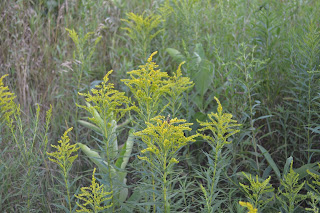 GOLDENROD IS STARTING TO BLOOM 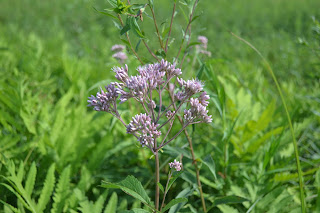 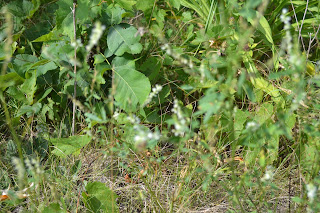 WHITE SWEET CLOVER-sorry its out of focus
No comments:
Email ThisBlogThis!Share to TwitterShare to FacebookShare to Pinterest

This may come under the heading of junk science, but here goes.

http://www.naturalnews.com/2017-06-15-honey-found-to-reduce-arterial-plaque-by-an-astonishing-30-could-it-prevent-heart-attacks.html
No comments:
Email ThisBlogThis!Share to TwitterShare to FacebookShare to Pinterest

This link takes you to a list of podcasts (along with a short description of each) about beekeeping.  Although the link is sourced from New Zealand most of the podcasts were sourced from US authors.
http://kiwimana.co.nz/top-free-beekeeping-podcasts/
No comments:
Email ThisBlogThis!Share to TwitterShare to FacebookShare to Pinterest

On Friday I heard a crop duster working the neighbors corn and bean fields.  Like Gerard this concerned me greatly.  I went and talked first with the neighbor.  He said the pilot was aware of my beehives and would not be spraying near them unless there was no wind or a wind out of the northeast which would tend to blow the chemicals away from my hives.  They were spraying a combination of fungicide and pesticide.  Corn cut worms were the pesticide target.

Friday night I also got a call from the pilot.  He was aware of all of my beehives having seen them in previous years from the air.  I queried him about DriftWatch.  He indicated that they utilize Drift Watch while making up their flight plan and encouraged me to sign up.  Also turned out I know him from another hobby pursuit.

Saturday afternoon about 3PM, after our club meeting, I heard the plane again and went to watch.  I looked at the weather and there was only a 2MPH wind speed. I got right under his flightpath so I could see what was happening.  The pilot leveled off at what seemed to be about only 10 feet above the corn.  The chemical plume didn't seem to spread more than 5 feet beyond plane's wingtip and quickly settled down to the corn.

My beehives are set back from the property line by about 150 feet except for one hive which is about 50 feet from the corn.  Four hours later I went up to the hives expecting the worst.  On the closest hive I saw two (2) twitching bees on the landing board.  Nothing abnormal on the remaining nine (9) hives.  I took another look this morning.  All appeared normal.  That closest hive was going full tilt out gathering nectar.  I popped off the outer and inner covers and the population seemed normal.

So I assume my hives were not hit by any overspray.  The two twitching bees were probably under the plane's flight path and came in direct contact with the pesticide.  I will be checking again tomorrow.

After this scare I will defintely be signing up at DriftWatch. 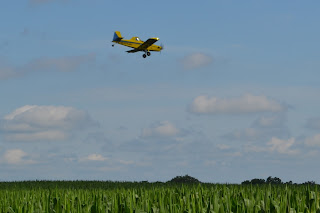 For first year beekeepers this will be your first time to also extract honey.  Try to team up with an experienced beekeeper for this first time.  If not watch this Natures Nectar video before you buy a lot of equipment.

THAT TIME OF YEAR

Its time to be thinking about varroa control.  New beekeepers should especially take note and read this article.  This article by Meghan Milbrath is a good refresher for everyone.

My take on this article and also based on my experience is that either formic aoid (MAQS) or thymol are the most effective mite controls, but require openning the hive.  Other treatments, while easier to apply, are less effective and may require multiple applications.  Using a combination of treatments may be the best strategy;  such as MAQS right after honey harvest in mid August and then an oxalic vapor follow up treatment later in the fall.

2 comments:
Email ThisBlogThis!Share to TwitterShare to FacebookShare to Pinterest

Again this year we have been asked to have a informational booth at the Green Lake County Fair, August 3rd through the 7th.  More details and a sign up sheet will be provided at this Saturday's club meeting.
No comments:
Email ThisBlogThis!Share to TwitterShare to FacebookShare to Pinterest

There will be a club meeting at the Ripon Public Library on Saturday, July 22nd at 9:30AM.  Topic of discussion will be control of varroa mites.
No comments:
Email ThisBlogThis!Share to TwitterShare to FacebookShare to Pinterest

The bee forage in central Wisconsin is continuing to bloom.  All of the clovers are still in bloom; White dutch, Yellow sweet, white sweet, Ladino, Alsike and prairie.  These plus alfalfa are the primary nectar sources.

The roadside plantings of birdsfoot trefoil, crown vetch and sweet clover are all doing well also.

The black locust flow is long past, but some areas may also get some nectar from basswood and linden trees.

In wild areas milkweed, thistles and bee balm are also contributing to the flow.  Still be make an appearance are joe pye weed, coneflowers, sunflowers and asters.
No comments:
Email ThisBlogThis!Share to TwitterShare to FacebookShare to Pinterest

Well we are in the dog days of summer now.  It’s getting too warm for my old dog to go out for a long walk and he prefers to lay on the cool basement floor.  Usually about this time of year the nectar flow also really drops off.  But this year the bees seem to be still working hard at bringing in nectar.  Yellow and white sweet clover is still blooming.  In fact over the weekend I noticed 5 of my hives were busy drawing new comb and filling the top honey super past the 25% point.  Based past years I normally wouldn’t bother with adding a super.  However, with the very wet June in central Wisconsin I decided to be an optimist and added a super to each hive.  I still have hopes for a bumper harvest this August.
Be sure to verify your hives are queenright.  Just last week I noted another queenless hive.  I decided to write off this hive.  The population was just too low to successfully recover prior to fall.  If I were a better beekeeper I would have noticed the extremely slow hive buildup and taken a corrective action sooner.  I’ll put this down as a lesson learned and add it (slow buildup) to my check list (in my head) for next year.

In mid-June I also gave each hive a shot of oxalic acid vapor to knock down the mite populations.  I checked a few hives with a powdered sugar roll and also using witness bottom boards.  The sugar rolls showed no mites, but the bottom witness boards showed my hives are not mite free.
My queen rearing attempts has had its ups and downs.  The spring was too cold and wet.  Consequently the queen yield was low.  I was getting more requests than I could supply.  Then my breeder queen quit laying.  She actually lived on for a month after that.  Since about mid-June, things have improved.  I was able to get a replacement Ankle Biter breeder queen.   Right now I am grafting twice per week with the aim of putting all the mating nucs into use.   I hope to have a large number of queens for use for re-queening in the fall.

The honey harvest in mid-August is fast approaching.  Count the number of full honey supers in your apiary.  Each full super equates to about 3 gallons (36 pounds) of golden honey.  Do you have enough buckets and bottles to hold your harvest?  More than once I have tried to get bottles in September, only to be told there were none in stock.  Plan ahead.
No comments:
Email ThisBlogThis!Share to TwitterShare to FacebookShare to Pinterest

Another successful ECWBA Field Day!  Denise Palkovich hosted the field day this year.  She had arranged for one of the Wisconsin State Bee Inspectors, Dan Ziehli, to be present.  Denise and Dan went through about 6 hives.  Denise pointing out the typical things to look for during a normal hive inspection.  Dan was also taking bee and debris samples for analysis later at state and federal labs.

Denise had a combination of 8 and 10 frame Langstroth hives.  She demonstrated some of her varroa control measures; varroa trapping on drone brood which she removed periodically.  Denise uses drone comb or lets the bees build the drone comb in deep supers by inserting a medium frame.  The bees fill the empty area with drone comb.  Her varroa control techniques appear to be working.  We got to inspection the varroa mite drop on pull out inspection boards.  The counts ranged from 0 to 3 mites for boards that had been in place for a week.

Denise has enlarged her apiary since our previous visit and is now running about 12 hives.  The state inspector found nothing out of the ordinary.   From Denise’s comments she has typical beekeeper issues; hives superceding their queens, poor performing hives, and hives making so much honey that the hives were getting unmanageable.

Denise ended the field day encouraging everyone to practice good mite control after the honey harvest in mid August and gave a brief description on how to use Apiguard, MiteAway Quick Strips and oxalic acid vapor.

Thank you Denise for a good educational field day. 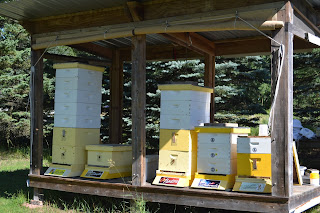 A few of Denise's hives 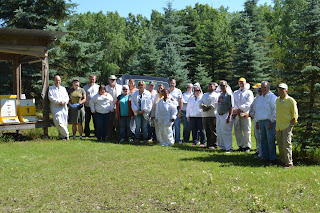 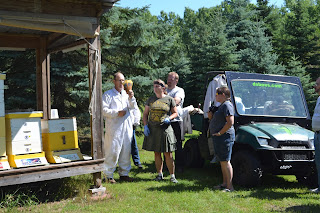 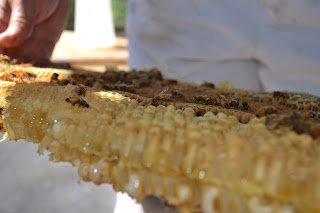 One of the drone combs used as a varroa trap 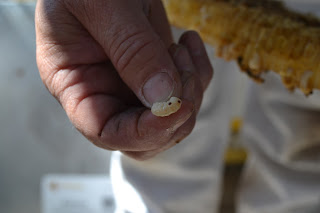 A drone larvae with two varroa mites
No comments:
Email ThisBlogThis!Share to TwitterShare to FacebookShare to Pinterest

Here is an interesting graph coming from the Minneapolis area.  The nectar flow has suddenly increased.  They have been experiencing similar weather patterns as central Wisconsin.  Now with the drier and hotter weather the bees are really bringing in the nectar.  It looks like 15 lbs  in 2 days.  That's about a third of a super!  So make sure to check your supers this week to ensure the bees have room to bring in and process that nectar.  NOTE: The nectar weight can actually decrease as the bees dry out the nectar to 18% water, which increases the honey sugar content.

http://www.paulsapiary.com/
No comments:
Email ThisBlogThis!Share to TwitterShare to FacebookShare to Pinterest

AND SOME MORE RESEARCH ON NEONICOTINOIDS

This article points the finger more strongly at neonicotinoids.  Since Minnesota banned neonics I wonder if their bees will do better than ours.

http://www.pbs.org/newshour/rundown/neonicotinoid-pesticides-slowly-killing-bees/
No comments:
Email ThisBlogThis!Share to TwitterShare to FacebookShare to Pinterest

A. Remember that this Saturday, July 8th, the ECWBA Field Day will be at Denise's Apiary.  It is located at N7928 Cty Rd WH, Fond du Lac, Wi.   The state inspector will arrive at 10:30AM sharp.  ECWBA recommends to be there at around 9:30AM for other discussions prior to his arrival.

B. Be sure to be inspecting your honey supers.  With the decline in rain the bees will be working overtime collecting nectar.  Add another honey super anytime the current super is more than 60% filled.

C.  Also continue your biweekly hive inspections to verify your hives are queenright.  Yes, removing the honey supers to get to the brood chambers is a pain in the you know what, but thats the only effective method of verifying the hive is queenright.