Most will agree that RAW honey comes straight from the hive without being pasteurized or filtered. This kind of honey usually crystallizes over time, causing the honey to be grainy or sugary. While that is a good sign, all the nutrients are still in the honey, it can turn some people off.
Now that we have had honey for a few months now, most of you are probably experiencing crystallized honey in your jars. Once the crystallization starts, it will continue to consume the whole container. The honey will get thicker and may even turn solid.
The best way to decrystallize your honey is with slow heat that is not above 110 degrees. Some will argue that you can go higher but most will agree that anything above 140 will destroy the nutrients and benefits. I think of it as, how hot would have the honey have gotten when it was in the hive?
There are lots of ways to slowly warm your honey back up in order to melt the crystals. Place your honey container in a pot of hot water, put it in the sun or hot room/car, wrap a heating pad around it, etc. Never put it in the microwave! Microwaves have uneven heating and will most likely go over 140 degrees. You can warm your honey to remove crystals as often as necessary.
However you like your honey, ENJOY!
Patti Ingram 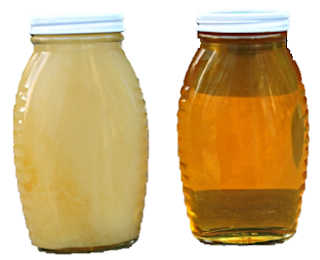 Barb has been the State Entomologist/Apiarist at the Ohio Department of Agriculture since 2009. Prior to that, she worked for 23 years at The Ohio State University as an entomologist and agronomic diagnostician in Extension.

As State Entomologist, she oversees the Apiary Program and identifies insects and other arthropods submitted from Ohio Nursery inspectors and businesses. Barb monitors the County Apiary Inspection Program and addresses honey bee issues in the state.

Barb has kept her own colonies of honey bees for over 35 years and belongs to Central Ohio Beekeepers and OSBA as well as The Ohio Lepidopterists and other insect-related organizations.

The Western Apicultural Society is hosting another Webinar.

The speakers are Dan Winter of the American Beekeeping Federation (ABF) and Chris Hiatt of the American Honey Producers Association (AHPA).  The topics of discussion aren't listed, but it's probably worthwhile to give them a listen.

As always, you have to register for this free event.

https://us02web.zoom.us/webinar/register/WN_HkXZussXRYGiWcq2fF6KnQ
No comments:
Email ThisBlogThis!Share to TwitterShare to FacebookShare to Pinterest

Why do Bees ABSCOND?

First of all, what is absconding?

When a colony absconds, all of the bees leave, including the queen.  This is rarely a spur of the moment decision by the colony, but is weeks in the making.  Once the decision is made to abscond, the foragers stop bringing in nectar and pollen for storage, the queen stops laying, and the colony waits around for the pupating bees to emerge.  Then the workers engorge with honey and off they go in search of a new home.  What the beekeeper finds is an empty hive.

The triggers for absconding are not well understood or agreed upon, but some things are considered valid.

#1 - something in the hive has them disturbed and they believe they will not survive in that environment.  This could be a certain odor; a high incidence of disease; a high rate of pests like Varroa, Small Hive Beetles or Wax Moths; continuous disturbance by outside forces (like skunks scratching on their doorstep every night; close proximity to a manufacturing facility that emits a disturbing frequency; or a beekeeper opening the hive every other day.).

#2 - lack of resources.  A hive that's in full sun all day and there's not enough water available to cool the hive sufficiently is a bad environment.  Resources (nectar and pollen) in scarce supply is also a bad environment, they need to find a place that has a sufficient amount of both.

#3 - inadequate ventilation, which adds to the summer cooling problem and the winter air exchange.

If a colony absconds in spring or early summer they have a pretty good chance of surviving the coming winter, same as a swarm does.  The colony will live in a temporary area for a period of time until scouts have located an acceptable nest site.

When a colony absconds, all of the bees leave.  They aren't reproducing, they're trying to escape a bad situation. This isn't unusual behavior, and in other parts of the world honey bees actually migrate, particularly in the tropical zone.  In some places it's an annual event with the colonies leaving for better forage sites when resources get low, with the same colonies returning to the same nests they left when forage is again available.  Some researchers think that honey bees in our temperate zone may also migrate for better forage sites, but the phenomena is pretty much identical to absconding so it's hard to prove.

If a colony absconds, and I've experienced that several times, the hive should be checked to see if anything can be determined as to what triggered it.  An impossible task in my experience.  Some people use a propane torch to sanitize the woodenware, some burn the hive.  I tried torching and the boxes smelled like a cold campfire afterward so I didn't do it again.  Instead I mix about 1/2 teaspoon of tea tree oil with water and a pinch of lecithin in a pint spray bottle and spray everything down making sure to get the liquid inside of the cells and running down the insides of the boxes.  Then I let it dry and put bees in when I have a colony needing a home.  It works.  (Tea tree oil is antifungal, antibacterial, and the bees like it.  Smells like Pine-Sol.)

If you're able to capture an absconded colony, don't return it to the same hive.  I did that once before I knew anything about absconding, and the next morning they took off and didn't even bother to stop to hang out nearby (I had gone to check on them just as they took off.).  They had had enough.  But the probability is good that they would have accepted a different hive in a different location.

As long as we have our hives well sited, in a location with sufficient resources (nectar, pollen, propolis and water) and few disturbances, the bees should stick around.  If they do abscond we may never know why, it's just another thing that bees do.

Scott is researching nurse bees and how they rear the brood. Different temperatures at different stages of development. Not just the same temperature all over the hive! Very interesting Power Point video on his research. 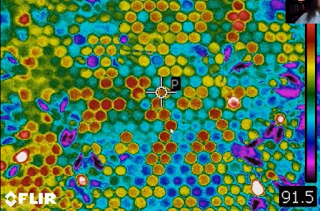