Sleek Urban Hive Lets You Keep Bees in the Comfort of Your Apartment - http://pulse.me/s/30NrM 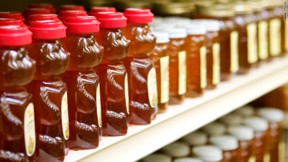 Most of the honey sold in chain stores across the country doesn't meet international quality standards for the sweet stuff, according to a Food Safety News analysis released this week.
One of the nation's leading melissopalynologists analyzed more than 60 jugs, jars and plastic bears of honey in 10 states and the District of Columbia for pollen content, Food Safety News said. He found that pollen was frequently filtered out of products labeled "honey.""The removal of these microscopic particles from deep within a flower would make the nectar flunk the quality standards set by most of the world's food safety agencies," the report says. "Without pollen there is no way to determine whether the honey came from legitimate and safe sources."
Among the findings:
• No pollen was found in 76 percent of samples from grocery stores including TOP Food, Safeway, Giant Eagle, QFC, Kroger, Metro Market, Harris Teeter, A&P, Stop & Shop and King Soopers.
• No pollen was found in 100 percent of samples from drugstores including Walgreens, Rite-Aid and CVS Pharmacy.
• The anticipated amount of pollen was found in samples bought at farmers markets, co-ops and stores like PCC and Trader Joe's.
Why does it matter where your honey comes from? An earlier Food Safety News investigation found that at least a third of all the honey consumed in the United States was likely smuggled from China and could be tainted with illegal antibiotics and heavy metals.
Foreign honey also puts a squeeze on American beekeepers, who have been lobbying for years for an enforceable national standard to prevent foreign honey from flooding the market.
The Food and Drug Administration does not have a standard of identity for honey like it does for milk or other products, a spokesman said.
The lack of regulation is what enables potentially unsafe honey is able to make its way into the country, Andrew Schneider, author of the Food and Safety News report.
"Where there's no pollen, there's no way for authorities to confirm where the honey came from, so it's easy to smuggle illicit honey into the country," he said.

from the original:  http://eatocracy.cnn.com/2011/11/09/most-honey-sold-in-u-s-grocery-stores-not-worthy-of-its-name/
No comments:
Email ThisBlogThis!Share to TwitterShare to FacebookShare to Pinterest
Newer Posts Older Posts Home
Subscribe to: Posts (Atom)