A few native nectar sources.   I hope your hives are strong enough to make use of these short lived flowers. 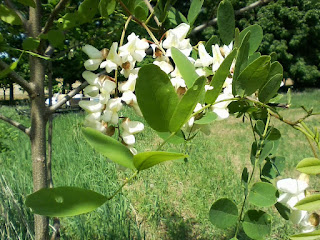 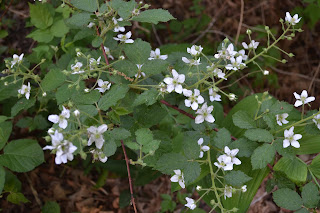 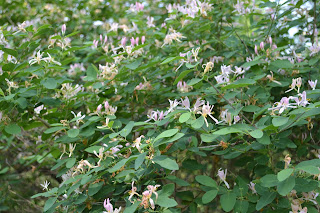 Two shrubs, names unknown, that the bees were foraging heavily 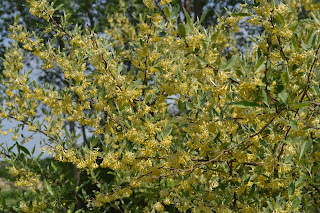 The honey flow is starting in the ECWBA area.  Today in addition to numerous bushes in bloom, I saw raspberries, clover and black locust in bloom.  In some areas the black locust honey flow can be significant.

Overwintered hives, of medium to strong strength, should definitely have a honey super installed at this point.   Check the supers weekly and be ready to add another super when the first super is 60% filled.  At this time you do not want the bees to begin storing nectar in the brood nest area if the honey super gets filled.  This will cut down on the places for the queen to lay and may promote an urge to swarm.

Some beekeepers recommend what is called "bottom supering".  In this technique the new empty honey super is installed underneath the partially filled first honey super.  The claim is that this method motivates the bees to gather more nectar.  "Bottom supering" requires more work of the beekeeper because he/she must remove the heavy partially super to install the empty super underneath.  I have seen no scientifically gathered data to support this claim.  Like most things involved with beekeeping there are varied opinions about "bottom supering".
No comments:
Email ThisBlogThis!Share to TwitterShare to FacebookShare to Pinterest

Today I was out checking some of my new package hives.  One hive was lagging behind the others.  Although there were several frames of capped brood there was no uncapped brood or eggs present.  A more detailed search showed my hive was queenless.  I took immediate action to install a new queen.

A hive without a queen is in trouble.  This is a lesson usually learned by hard knocks by new beekeepers.  For this reason it is recommended for beekeepers to inspect their hives every other week.  The inspection is intended to verify that there are eggs and brood present.  If these are present they allow the beekeeper to assess the condition of the queen even if they are not skilled enough to readily find her.  A hive with eggs, uncapped brood and capped brood is termed to be "queenright".

Without a queen the hive goes into decline.  a queenless hive also triggers other events.  Without the presence of queen pheromones the bees will usually initiate an emergency queen replacement if the right age and right sex larvae can be found.  Emergency queen cells are usually found in the middle of the frame.  Swarm cells are usually found on the bottom of the frame.

The brood also emits pheromones.  The brood pheromones inhibit normally sterile worker bees from laying eggs.  21 days after the loss of the queen the worker brood has all emerged.  Then the workers attempt to propagate the genetics of colony by raising drones.  Although they may raise drones, drones contribute nothing to the survival of the hive and the hive will go into inevitable decline.

By inspecting once every two weeks you will be able to detect the queenless condition prior to hive population crashing and prior to laying workers beginning to raise drones.

Most beekeepers (new and old) get into trouble once the honey supers are put on the hive.  Then the work involved with a hive inspection gets more time consuming and many beekeepers (new and old) blow off the biweekly inspection much to their peril.   Some beekeepers think they can accurately gauge the condition of the hive by the amount of flight activity at the entrance.   Things appear normal until all the brood is done emerging.  By then the brood pheromones are dissipated and laying workers are in control.   Do so at your peril.

Put in the effort to verify your hives are queenright and you will be rewarded with more honey.
No comments:
Email ThisBlogThis!Share to TwitterShare to FacebookShare to Pinterest

The hot weather of this coming week will be good for the bees.  However, you should remember that strong hives need ventilation to cool the hive.  For strong hives it is recommended to now completely remove the entrance reducer.  This year's new package hives are still growing and their population is probably not yet large enough to cause overheating.  The entrance reducer for these hives should oriented so the 4 inch opening is open.
No comments:
Email ThisBlogThis!Share to TwitterShare to FacebookShare to Pinterest

Here is one of the first reports on this past winter's hive losses.  What is interesting is that the losses of backyard beekeepers were 46% compared to 26% for commercial beekeepers.  It also indicates varroa is the primary reason for winter losses and that year round monitoring and control of varroa is required to lower backyard beekeeper losses.

https://www.al.com/news/index.ssf/2018/05/americas_beekeepers_report_40.html
No comments:
Email ThisBlogThis!Share to TwitterShare to FacebookShare to Pinterest

The weather in the coming week will be ideal for swarming of strong overwintered hives.  Follow this link for some excellent advise on how to prevent swarming and how to catch swarms.

This is a reminder of our regularly scheduled club meeting at 9:30AM on May 19th at the Caestecker Public Library in Green Lake.  Topics for the meeting will be checks needed for new packages and other items of interest.
No comments:
Email ThisBlogThis!Share to TwitterShare to FacebookShare to Pinterest

Today I got reminded twice on one of the routine tasks required of a good beekeeper.  That task is to perform a periodic inspection to verify your hives are queen right.  I started out the day with a plan to inspect all hives started this spring with packages.  I went through 12 hives and at the last one found a hive to be queenless.  Luckily I have several new mated queens arriving tomorrow.   This experience reminded me to take a look at an overwintered hive I had been wondering about do to its slow buildup.  Yep, another queenless hive.

A hive can be queenless for a little more than 3 weeks before laying workers take over.  Three weeks is the time it take for all the brood to mature and emerge.  The pheromones from this brood suppress the urge of the workers to lay.   So a good beekeeper tries to verify his hives are queen right about once every two weeks if he or she wants to avoid a hive going queenless and then getting laying workers.
1 comment:
Email ThisBlogThis!Share to TwitterShare to FacebookShare to Pinterest

Why re-invent the wheel.  The Nature's Nectar blog has a good article about package buildup and also what to do with overwintered hives.  Follow the link below:

In the event you have set aside a little spare cash and would like a European vacation why not take in World Bee Day.

https://www.worldbeeday.org/en/events/event/81-first-celebration-of-world-bee-day.html
No comments:
Email ThisBlogThis!Share to TwitterShare to FacebookShare to Pinterest

We are finally getting a little bee friendly weather.  The bees have been busy bringing in tree pollen with which to raise brood.  Also been seeing a little clear nectar.  But the late snow storms in April have really set back the normal hive buildup.  While inspecting hives in the last week of April I have noticed two things.  In general, bee populations in overwintered hives are significantly lower than last year.  Last year the hives were fully occupying both brood chamber boxes by this time.  This year, the bees were only in the top box of most overwintered hives.  Slightly better, but not by much, than newly installed packages.  Dandelions also made a late appearance on April 27th.  It appears we are about 3 weeks behind what is normal for central Wisconsin.


As a beekeeper who raises queens I also need to monitor the hives for the presence of drones.  So far this year I have not seen any drones although I have seen a few capped drone cells.  Currently the bees are putting all available resources into raising worker brood.  Based on these observations I doubt conditions at this time will result in May swarming.  June swarming is an entirely different kettle of fish.  To get swarming requires high bee populations, drones, queen cells and a strong honey flow; none of which are present right now.


This year I am trying to improve my mite control process.  As part of this I have installed screened bottom boards on two overwintered hives in order to closely monitor mite populations.   About two weeks prior to installing the screened bottom boards I treated the two hives twice with oxalic acid vapor.  Two days after installing the screened bottom boards I checked the witness boards and both hives had dropped 2 mites each.   After 2 more days I checked again and there were 7 and 3 mites on the bottom boards.   I will be using a mite drop threshold of 10 mite in a week as the trigger to do a mite treatment.  Curiosity getting the better of me I checked again after 2 more days.  This time there were 0 and 4 mites.  Both hives are now tied at a 9 mite drop after 6 days or 1 ½ per day.   It appears that the 2 oxalic acid vapor treatments did not eliminate the mites in these two hives.   I will be following up with more treatments and mite counts in May and also comparing the effectiveness of oxalic vapor versus an oxalic alcohol treatment.


Based on the mite drop noted above it is possible to roughly estimate the mite population in those two hives.  Based on the 1 ½ mite drop per day there are approximately 300 mites in each of those two hives.  Consulting with Randy Oliver’s varroa mite model it appears that these two hives will definitely be in the danger zone by August.  Therefore, I will be treating for mites on all overwintered hives prior to mid-May.   I will probably be using a ½ dose of MAQS or FormicPro.


Last week (April 26th) I got my courage up and did my first queen graft for the year.  The first night the newly grafted queen cells spent the night in my basement since overnight temperatures were down in the upper 20’s.  As of May 1st I had 17 capped queen cells.  There still is a 3 week wait for the queens to emerge and mate.


Our replacement packages finally arrived on April 30th.  So I spent today installing them.


Tasks to be done in May are:


-Treat for mites in all overwintered hives about mid-May


-After the mite treatment is a good time to install the first honey super.  There is always the chance of a big nectar flow from locust trees.  Use or not use a queen excluder according to your preference.
No comments:
Email ThisBlogThis!Share to TwitterShare to FacebookShare to Pinterest
Newer Posts Older Posts Home
Subscribe to: Posts (Atom)