Minnesota's governor has issued an executive action banning the use of neonictinoid pesticides unless the farmer provides evidence of an urgent need to control a pest.  How this executive action will actually be enforced is open to question.  See the attached article.

Goldenrod is part of the aster family of flowers and is widespread in rural areas.  Asters are the last pollen and nectar source for the bees in the fall.  The pollen is used for raising the winter bees. 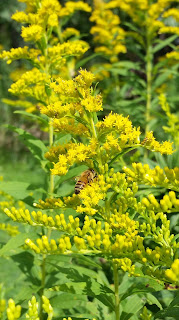 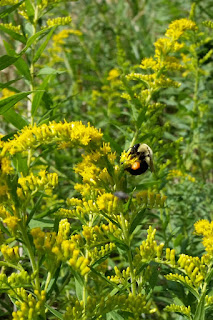 Bumble bee on goldenrod
No comments:
Email ThisBlogThis!Share to TwitterShare to FacebookShare to Pinterest

RE-QUEEN OR NOT by beekeeper Fred

It’s late August or early September and you have just completed your honey harvest.   This is the time that many beekeepers discover to their dismay that their hive is queenless.   So you ask yourself the question as to whether to invest the $25 to $30 for a new queen knowing that winter will be here shortly and could easily kill off the entire hive if you aren’t very successful in overwintering hives.
Therefore, the first question is “do I spend the money now or save it for a package next spring?”
.
If you decide to get the replacement queen you next need to examine your queenless colony in more detail.  You need to assess whether the hive became queenless recently or more than a month ago.  If you can see capped worker brood then the colony became queenless less than three (3) weeks ago.  The presence of either open or capped brood suppresses the tendency toward laying workers.   Under these conditions it is OK to re-queen.

However, if you only see randomly spaced uncapped or capped drone cells then your hive has passed a critical point.  Past the 3 week threshold laying workers take over the hive.  It is very difficult to re-queen a hive that has laying workers.  These workers will tend to kick out or kill a newly introduced queen.  You are better off saving your money for the new package next spring.

The only successful method to re-queen a hive with laying workers is by repeatedly introducing frames of brood from another hive.  The frames should have both open and capped brood.  The brood pheromones will suppress the laying workers and MAY allow you to introduce a new queen.  It’s still only a 50/50 proposition.
In the fall if you see the symptoms of laying workers it is probably best to just combine the queenless hive with another strong hive.
Fall is also the time that some beekeepers replace queens for a variety of other reasons:
1) Changing the genetics of aggressive hives,
2) Eliminating old queens,
3) Incorporating improved genetics into your apiary.
4) Replacing queens of swarms captured that summer since swarm queens tend to be old queens

In all cases make sure you have a replacement queen in hand prior to dispatching the old queen.
No comments:
Email ThisBlogThis!Share to TwitterShare to FacebookShare to Pinterest

Beekeeper Jon built a semi-automated decapper to help with the honey harvest.  To get the benefit of the decapper you need to use 8 or 9 frames in a 10 frame honey super.  If the bees cooperate and built thicker combs then decapping is a breeze.  I had used 9 frames in my supers and the bees did not always build the extra thick comb.  At any rate it took 1 1/2 days to do my honey harvest last year.  With approximately the same number of supers we were able to decap and extract the honey in only 1 day.  There was still a fair amount of hand decapping with the electric knife, so I think I may try 8 frames in some supers next year. 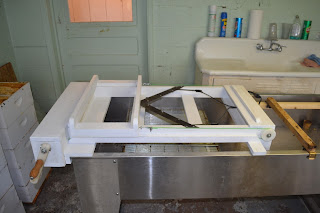 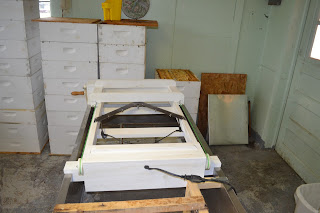 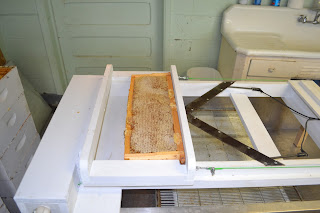 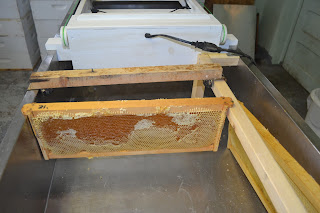 Shows knife can not reach into concave areas.  These require hand work. 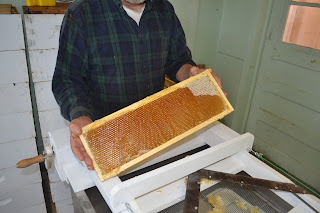 This one was almost 100% decapped.  Takes about 15 seconds per frame per side.
No comments:
Email ThisBlogThis!Share to TwitterShare to FacebookShare to Pinterest

Here is a study that utilized 20 years of data and seems to make a correlations between use of neonictinoids and bee decline.

EDITORS COMMENT: Since Europe has banned neonics for about 3 years now I wonder if anyone is tracking the response of bee populations?
No comments:
Email ThisBlogThis!Share to TwitterShare to FacebookShare to Pinterest

A day in the apiary by beekeeper Fred

I had planned a simple day in the apiary today.  All I planned to do was put 5 queens cells in nucs that had already been stocked with bees.  Shouldn't take more the a 1/2 hour I thought.

Arriving in the apiary to pick up the queen cells I heard that distinctive roar of a swarm.   Swarms are supposed to occur in May and June; not the hot dog days of August.  But there it was 30 feet up in a wind break tree  Not one to let a $100 bill slip through my fingers I quickly went and fetched the chain saw.  I was able to drop the tree rather gently.   After clearing away the branches I located the swarm and they started marching into the empty hive I provided.   But they didn't settle in immediately.   A large group continued to hang out at the entrance; so I started a search for the queen.  About 5 feet away I luckily spied a small cluster of bees on a leaf.  There she was; a small virgin queen being attended by about 5 bees.  After two tries I captured this flighty queen and laid her at the hive entrance.  She happily scurried in and was soon followed by the large group at the entrance.  Success!

I thought I better start feeding them so they can get through the winter.  So I was walking through the apiary looking for a hive top feeder, but was interrupted again.  About 100 feet away there at my feet was another swarm.  Just a mass of bees, 3 feet in diameter, on the grass.  Slid another empty hive next to the swarm and they too started marching in.  Checked a half hour later and quickly found the queen in her new home.

Both hives now have a hive top feeder with sugar water to help them settle in.  I guess some days you just get lucky.  Didn't get stung either!   Tomorrow I start pulling honey supers.  I suspect I won't get off sting free then!
No comments:
Email ThisBlogThis!Share to TwitterShare to FacebookShare to Pinterest

See the following link for information on National Honey Bee Day.  Its a little late for club members to do anything about national honey bee day, but you could use next Saturday to verify your hives are queen right and apply some mite control if your honey has already been removed.  Helping your bees get through winter is the best observance of NHBD.

At the end of summer yellow jackets can begin to rob weak honey bee hives.  The beekeeper can take several actions to discourage them.  Read the article in the link below.  You can also help your weak hives by re-installing the entrance reducer; limit the entrance to the 4 inch long opening.  In addition you can put out several yellow jacket traps.  These can be easily made by re-cycling a 2 liter plastic pop bottle.  Cut an entrance hole near the top.  Then add a little sugar water to the bottle.  The yellow jackets are attracted by the sugar water, enter the bottle , and become trapped.

http://www.keepingbackyardbees.com/theyre-here-yellow-jacket-season-is-upon-us/
No comments:
Email ThisBlogThis!Share to TwitterShare to FacebookShare to Pinterest

Its now August; the traditional time for the summer dearth in our beekeeping area.  This is occurs after the main honey flow from alfalfa, clovers and nectar producing trees go into decline.  The bees go from producing a surplus to working hard to just break even.  Some queens stop egg laying during the dearth.  Workers may even cannibalize eggs and brood during the dearth to keep the hive population in check.  There are still nectar producing plants in flower.  Strong hives can sometimes still put away a little honey at this time.  Other hives are busy just trying to break even.  Here are a few flowers making nectar at this time.  Much depends on your location. 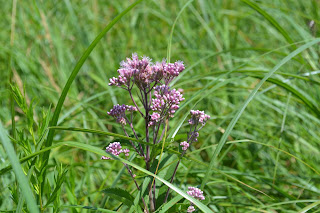 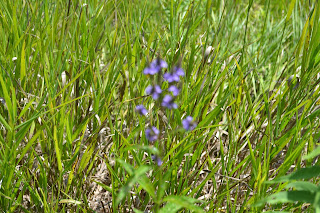 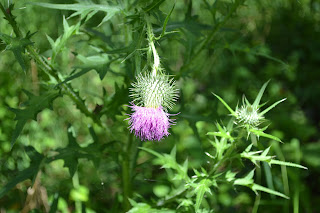 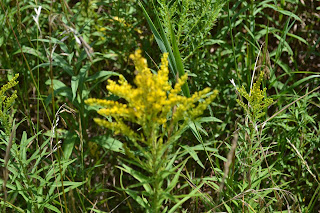 Goldenrod can be a big honey producer
No comments:
Email ThisBlogThis!Share to TwitterShare to FacebookShare to Pinterest

This year the club had a booth in the Ag Educational tent at the Green Lake County fair.  The purpose was to educate the public about bees in general and potentially interest new beekeepers in joining the club.  A special thank you to all members that took part in erecting, manning and disassembling the booth.  As exhibitors we also have learned a few things on putting on an educational exhibit.  Old and new beekeepers stopped by.  Heard too many stories of bears appearing in the Green Lake area! 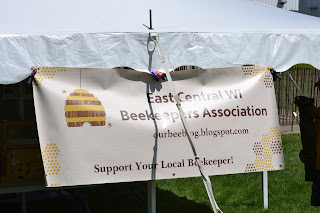 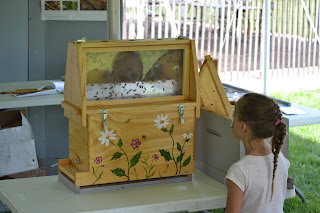 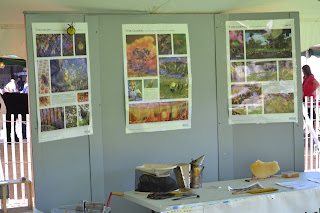 Information board
No comments:
Email ThisBlogThis!Share to TwitterShare to FacebookShare to Pinterest

HIVE INSPECTIONS DURING A DEARTH

This topic is very appropriate for our area which is now undergoing our annual late summer dearth before the goldenrod and asters begin to bloom.

http://www.keepingbackyardbees.com/hive-inspections-during-dearth/
No comments:
Email ThisBlogThis!Share to TwitterShare to FacebookShare to Pinterest

Here is a short article on how the gut bacteria influence bee health.