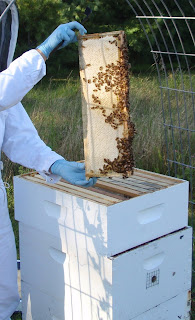 The plan: I'll be harvesting honey from two hives at this site. Bees will be cleared from frames (outside) and honey will be extracted (inside).

The timing regarding such an activity is open ended because it depends on an element of nature....BEES. Harvest will not take place if it's raining (on either day) How long will it take? Don't know.

Light refreshments will be available - if you require something more substantial, bring a picnic lunch.

"Protection" from bees is ON YOUR OWN - whatever you require to feel comfortable. Bug Spray NOT ALLOWED.
No comments:
Email ThisBlogThis!Share to TwitterShare to FacebookShare to Pinterest 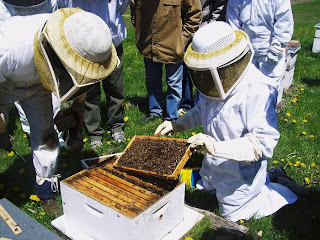 Pictures from our Spring Field Day are uploaded to our webgallery (link is located in the sidebar "Our Bee Blog Pictures")
No comments:
Email ThisBlogThis!Share to TwitterShare to FacebookShare to Pinterest

dealing with a queenless hive

This is where having additional hives is a great help!

Through all the swarming activity of May and June - I ended up with one queenless hive . Without a queen this hive will dwindle and die.

Over 4 weeks ago - I gave my queenless hive 2 frames of FRESH layed eggs. I exchanged the frames and let the hive "rest" for 3 weeks. 2 weeks for them to MAKE the queen - another week to leave "nature" be. Inspection 2 weeks ago revealed - "they forgot how to make a queen" or "something"??? who knows. Not one attempt was made to make a queen cell.

Once again - I robbed frames of EGGS from the donor hive....this time...one frame had the beginnings of a queen cell - with nice white royal jelly layed in the bottom.

Inspection is planned for this weekend. What will if find? I'm hoping they continued to nurture the queen cell. For a hive to REQUEEN in the fall is not a bad thing - as long as they do so before they start killing off the drones for winter (kinda need them yet). You'll start out in the spring with a nice fertile queen.

What if they failed, again? I'll seriously start making plans to get this hive down to 10 frames (one deep) and get them combined with another hive. (I have to make some determination as to the population numbers) It'd be better to do this sooner than later. It's going to mess up the strong hive for nectar/honey storage. I'm not being selfish here talking about MY honey - I'm talking about the honey storage THEY NEED for the winter. Remember - while these hives are "combining" they are 3 deeps high! (3 deeps that need to go back down to 2 for overwintering - and it's WHAT MONTH?) We've got about 3 months to get everyone and everything rearranged.
No comments:
Email ThisBlogThis!Share to TwitterShare to FacebookShare to Pinterest

i found a couple more blogs and websites to add to our list (they'll also be on the sidebar for future reference)
from ILLINOIS: http://basicbeekeeping.blogspot.com
from WASHINGTON state: http://davesbeeadventure.com
No comments:
Email ThisBlogThis!Share to TwitterShare to FacebookShare to Pinterest

are you a BEE SHAMAN?

there's a book out called, "The Shamanic Way of the Bee: Ancient Wisdom and Healing Practices of the Bee Masters" by Simon Buxton

A Western Shamanic Tradition: The Path of Pollen

The cells of the Shamanic Way of the Bee comprise a Bee Master and his apprentice, alongside the Bee Mistress and her Mellisae, her female students and associates. There is no formal recruitment; rather members are mysteriously drawn to the tradition.

In the case of Simon Buxton, this first experience occurred at a young age, through a very serious illness that was averted by a neighbor who performed shamanic rites linked to his role as a beekeeper. Beekeeper and boy became firm friends following this incident, and through this friendship Simon Buxton learned the rudiments of beekeeping, skills which were to stand him in good stead as an adult drawn to the Shamanic Way of the Bee.

He became the final apprentice of a respected elder of the path of pollen, the enigmatic and charismatically wise Bridges. This path leads him through sometimes terrifyingly challenging experiences through which he learned of deep shamanic truths thanks to his close bond with the bees.

feels "weird" out there

i've noted some strange behavior in the hives...

i've got two hives (of 5) that are propolising the extra entrance holes shut. one hive has half the main entrance closed off.

is it our unseasonable, dramatic weather??? or do the bees know something about this winter that we don't?
No comments:
Email ThisBlogThis!Share to TwitterShare to FacebookShare to Pinterest
Newer Posts Older Posts Home
Subscribe to: Posts (Atom)